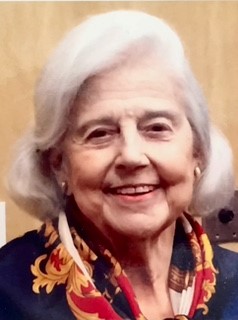 Martha Clark Kane Brown died October 23, 2022 in Savannah, GA. She was born in 1926 in Richmond, VA and grew up in Charlottesville, VA and Kingsport, TN. A Phi Kappa Phi honor graduate of the University of Tennessee, Knoxville, she was editor of the campus newspaper and president of Chi Omega. At Tennessee she met her husband Edward Ansel Brown of Chattanooga.

She continued a lifelong study of literature at Cambridge University, England; University of North Wales; and John Carroll University, Cleveland, OH. She first began teaching in 1950 at Savannah High School (now Savannah Arts Academy), and for 20 years taught English at Hawken School, Cleveland, OH. She was also a member of the Cleveland Novel Club, the Ohio Episcopal Bishop’s Commission on Ministry and the vestry of St. Christopher’s-by-the-River, Gates Mills, OH. In New Canaan, CT she was an officer of the Stamford Junior League which she had joined in Savannah in 1954.

On the Browns’ retiring to Savannah, she wrote book reviews for “This Week at the Landings,” and was a member of St. Peter’s Episcopal Church, where she served on the vestry. She belonged to the Proust Readers which read classics together and then traveled to their settings. A member of P.E.O. and The One Hundred, she was on the founding groups of the Savannah Book Festival, Skidaway Bookends and the Marshes Book Club.

A memorial service will be held at St. Peter’s Episcopal Church, Skidaway Island on Thursday, November 3 at 11:00am.

Martha was the brightest, most lovely woman! I admired her and stood in awe of her brilliance and sweetness. She lived a complete life and touched each of us who knew her.

Dear Mardee and Allison and your entire family, I am very sad to learn about your mother. What a legacy of literature she left, sharing her passion for books with students, family, friends, and neighbors! I know how devoted you were to her, traveling to Savannah to visit and help out. Take care. Sending hugs and my deepest condolences, Erika Fine

Martha was a remarkable woman and meant so much to those who knew her. Bless you, Martha, for all you gave to so many.

Mrs. Brown was my middle school English teacher; one who made an impact on my love of literature and understanding of Latin roots. She taught me how to annotate books, starting with The Hobbit, I believe. Her words and guidance have stuck with me as I still annotate just about everything that comes across my desk. At age 53, I hold onto a journal and other project mementos from my year with her. There are hundreds, if not thousands of us who benefitted from our years with Mrs. Brown. Our condolences to the family. Your mom/grandmother/great grandmother was special.