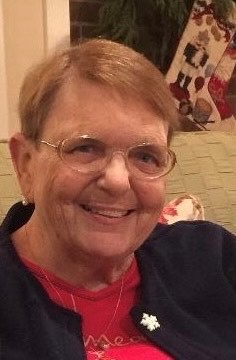 Patricia Jean Rafferty Parr, 77, passed away on July 3rd, 2022 after a long battle with Alzheimer’s.  She was born in Nashville, Tennessee on December 11, 1944, the daughter of Francis Xavier and Louise Summerford Rafferty. She was raised in Martinsburg, West Virginia and graduated from Martinsburg High School in 1963.  She graduated from Hagerstown Business College.

In 1967, she accepted a position as a secretary for the CIA and moved to Berlin, Germany.  While in Berlin, she met her husband of 53 years, Joe Parr, a military police officer assigned to the CIA.  They were married in Martinsburg on May 31,1969.  In 1975, they settled in Hamilton, Virginia.  Pat was a stay-at-home mom until 1984 when she began working as a real estate secretary for Raymond Realty in Hamilton.  In 1993, she went on to work for the Virginia Commonwealth’s Attorney’s office in Leesburg as a legal secretary until her retirement in 2002.  In 2003, Pat and Joe retired to Savannah, Georgia.

Pat was very active in her children’s sports and activities. She and Joe enjoyed traveling and their trips took them all over the United States, Europe, the Caribbean and Australia.  She was an active member of the Coastal Corvette Club and enjoyed many monthly cruise nights.  In her retirement, she worked part-time for the children’s store, Robyn’s Nest. She was a communicant of the Cathedral Basilica of St. John the Baptist. Her greatest joy was being “Mimi” to her grandchildren.

The Mass of Christian Burial will be at 10:00 a.m. on Friday, July 8, 2022 at the Cathedral Basilica of St. John the Baptist. Burial will be private.

In lieu of flowers, memorial contributions may be made to the Hope Arbor Scholarship Fund at Isle of Hope United Methodist Church, 412 Parkersburg Road, Savannah, GA, 31406. Hope Arbor is a community respite ministry to those who have memory loss and where Pat was a joyful participant.

Pat was my cousin and we shared many family events as we were growing up. She will always be remembered.

Katie: I am so sorry for your loss. Your Mom and I had some really good times when you kids where young. I remember often how she stepped up and helped me so much when my Dad died. She was truly a great friend and a terrific person.

Joe Parr and family. Our deepest condolences for your loss. We remember Pat as a loving mother to Joey and Katie and wife to you, as well as a good neighbor to us, prior to your moving to Savannah. May God bless you during this difficult time. Prayers for the family.

Joe and Pat were husband and wife, friend and companion, and together they were the creators of a wonderful family. I have known Joe for many years. He is like the Sun coming up each morning. He raised my spirits ever time I saw him. I know that Pat was blessed to have Joe at her side throughout her life. It makes me feel good to have known them through the years.

We have known Joe and Pat forever. We watched Katie and Joey grow up. This breaks our hearts but we know she is in a better place. We want to remember Pat as she was in the picture, always smiling. She truly was a wonderful, loving person who loved being with her grandkids so much. Rest in peace, Pat, until we meet again. Much love to Joe, Katie and Joey.

So sorry to hear of Pat's passing. She was a wonderful lady. Our love and prayers are with you all.

Ken and I had a lot of good times with Joe and Pat when we were in Germany and have been able to stay in touch ever since. Pat was one of the most kind-hearted persons I have ever known and a good friend. She will be missed by all.

Pat was a joyful spirit when in good health, and always brightened our club gatherings. She will be missed. Thoughts and prayers go out to Joe and family.

We will miss Pat. She was a very special lady and kind to all who knew her. She was also a wonderful cook! Prayers for comfort to Joe and the family

Joe, Joey And Katie I am so very sorry for your loss. My thoughts are with you during these difficult days. My sincere condolences for your family. Your Hamilton neighbor

Memories of Pat and the Parr family are part of the fabric of our lives. We wish you strength, solace, and peace at this difficult time. Take care, The Winters

We are so sorry for your loss and the loss of my sweet cousin I wish we could have had more time to spin together.

Joe and family so sorry for your loss. Pat was a great person and will be missed by all. Blessings to you and your family.