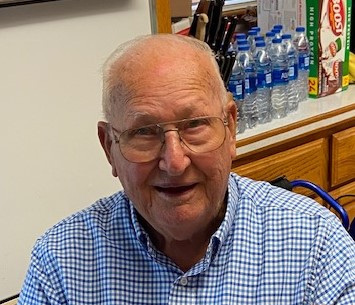 John Derrick Hinely, 95, died peacefully on Monday, January 17th, in the home that he built, surrounded by his loving family and friends.

In 1948, John married the former Iris Williams of Wilmington, North Carolina. They have two children. He retired from Norfolk Southern after 42 years of service in the Railway industry. He also owned a cabinet shop where he built custom cabinetry for Bouy, Hall, and Howard, the Bouy brothers, & Hallmark boys. He was a member of Acacia Lodge, F&AM, the Scottish Rite, Alee Temple Shrine Club, The Royal Order of Jesters, Oriental Band, Claxton Shrine Club, Tybee Lite Shrine Club. He was also on the board of Farm Bureau Insurance.
John was a member of Grace United Methodist Church. Along with good friends of the church, He was a founding member of the Gleaners Sunday school class.

John and his beautiful wife traveled the world together accompanied by their friends and family. He particularly cherished the memories of their trip to the Holy Land.

His friends and family will miss hearing the constant repetition of stories involving working on the railroad, his travels, and the misadventures of his grandchildren and great grandchildren.

The family would like to extend their thanks to the nurses and aids of Amedisys and to all of John’s friends who shared in his care.

Visitation will be at 10AM on Friday, January 21st, at Grace United Methodist Church followed by funeral service at 11AM. Entombment will be in Forest Lawn Memory Gardens Mausoleum.

In lieu of flowers, the family requests that donations be made to Grace United Methodist Church or The Shriners Hospital for Crippled Children.

So sorry to hear of PePaw's passing. I know he is at peace now with his beautiful wife walking on those streets of gold!

What a wonderful photo of Uncle John! It’s exactly how I remember this kind and loving man, who was special to so many of us! My thoughts & prayers are with you all during this time!

What a “special” friend Mr Hinely was to all Who knew and loved him. He was always willing to give more than his share to Anything involving Grace Church, or any Personal need that came to his attention. Laughing was his “specialty!” Especially When he told his “Life Stories!” He waited patiently for his Lord to call him home…..and now he’s in the presence of His Lord and Savior…..And his sweet wife Iris. Rest In Peace our friend, until we meet again. With love, The Hendrix

Always enjoyed spending time, laughing and carrying on, with John & Iris when I was their pastor at Grace United Methodist Church. We, along with Frank Fesler, had a standing lunch date every Tuesday. John & Iris were two of the sweetest friends. Grateful for many wonderful memories!

Dear Jo Beth and family, I was sorry to read of your dad’s passing. Please know that you are all in my thoughts and prayers. Sincerely, Brooks Youmans

Our sincere condolences to the family. Our thoughts and prayers are with you.

We are all so sorry for your loss. We lived across the street from John and Iris for 29 years. I was fortunate to be able to go by and see him a couple of months ago. He was always great to talk to and hear his many life experiences. I know he will be sadly missed.

John was a storehouse of knowledge about his church, and a strong supporter of lt. We will miss him greatly.

On behalf of Amedisys Hospice, I would like to express our sympathy with the passing of Mr John. In life he served, loved and worshipped the Lord with all of his heart which was evidenced through his love of his family. Now he is rejoicing in his eternal reward. Thank you family, for the honor and privilege of being entrusted to help provide care for Mr John. Our prayers are with you. Sincerely, Danny Smith, Chaplain and Your Amedisys Hospice Family

I am so sorry to hear of Mr. Hinely's passing. What a fellow. He was a patient for a few years, I enjoyed hearing of his "single-. handedly keeping the railroad running" !! LOL. We got to see each other nearly everyday at "Larry's Restaurant". While at Larry's we solved many of the world's problems!! He and his kind will be sorely missed. Again my condolences.

Sherry and I met John and Iris several times while spending time at the NS Layby property. What a magical couple to spend time with while burying your feet in the sand. John was a story teller to envy. I could easily tell from our many conversations that he’d of been an absolute blast to work with. He personally left me with several memories that I cherish as part of growing up. Many hugs and warm thoughts to his family. Aaron and Sherry

So sorry about Mr. Hinely. My condolences go out to the family. He was a very special person and kind and giving. He always had stories to tell some you had already heard but they were always good. He was very proud of his grand kids. They were very lucky to have him. May God bless him and he will be missed