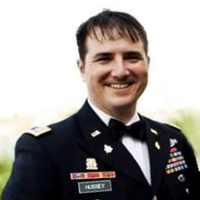 William “John” Hussey, 42, passed away suddenly on November 15, 2021, at the University of Virginia Medical Center in Charlottesville, Virginia.  He was born in Frankfurt, Germany on January 29, 1979, and was the son of Bettye Hook Hussey and the late COL. William Van Hussey.

John graduated from Texas State University and obtained the rank of Major during his service in the United States Army. After leaving the military, he joined the U.S. Department of State as a Foreign Service Officer serving in Manila, Philippines; Maputo, Mozambique; Washington, D.C.; and was recently stationed at U.S. Embassy Baku in Azerbaijan.

John was an U.S. Army hero, a Special Operations Civil Affairs officer, a doctrine writer in Abu Dhabi, and a U.S. Foreign Service Officer specializing in human rights. He studied Spanish, German, Russian, and even a bit of Kiswahili. He was a husband, father, son, brother, uncle, nephew, cousin, and friend.

A humble but well-traveled man, John will be remembered for his quick wit, infectious smile, and love of wearing flip flops even in the winter. He is best known for his marvelous cooking, his loyal friendship, and his love for his family. Whether enjoying the beach, scuba diving, snowboarding, or camping, John had a kind word and a story to tell.

Surviving are his wife, Jean Marie Hussey and two sons, Joshua and Jacob.  Also surviving are his mother, Bettye Hook Hussey of Harrisonburg, Virginia; a sister, Alisabeth Gheen and husband, Will of Harrisonburg; three nieces, Ryleigh, Charlotte and Addison Gheen; father and mother-in-law, Michael and Darla Donnenwirth of Bucyrus, Ohio and his faithful dog, Paddy; as well as many cousins and a multitude of friends.

A memorial service will be conducted at 10:00 a.m. Saturday, November 20, 2021, at Kyger Funeral Home in Harrisonburg, Virginia. A reception will follow, located at the Preston Lake Community Club.

A celebration of life service will be conducted at 11:00 a.m. Monday, November 22, 2021, at Christ Church Episcopal in Savannah, Georgia with interment following at Bonaventure Cemetery. The Very Rev. Anne M. Maxwell, of Jackson, Mississippi will officiate the two services.

In lieu of flowers, memorial contributions may be made to the Special Operations Warrior Foundation at https://specialops.org or the charity of your choice.

John had the pleasure of getting to know people and cultures all over the world. How loving to learn their languages and strive to understand these people. We can only imagine how thrilled John will be to enjoy all people in paradise. When he is resurrected (John 5:28,29) to paradise, there will be no more war, pain ,sickness or death. He can focus on serving the heavenly Kingdom by Christ Jesus. This government will replace human government. Daniel 2:44 Just as weapons will be turned into a peaceful purpose as stated on the wall of the United Nations building. Isaiah 2:4 What a pleasure to serve with eternal life in view. JW.org, “Enjoy Life Forever” Love and Prayers, Sandy Wirfs

Words cannot express how large this loss is to my entire family and I. I know John is re-united with his father, my sister, and so many loved ones and fallen warriors. Our thoughts and prayers to Jean, Joshua, Jacob, Bettye, Alisabeth and the entire family. We love each and every one of you and will forever be grateful and humbled that a man like John was in our lives for so long.

Truly sorry to hear of John's passing. You are in our thoughts and prayers.

We’re so sorry for your loss. Our thoughts and prayers are with your family.