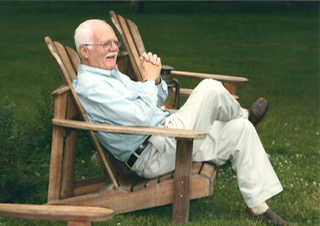 After graduating from Texas Tech University, with an Undergraduate Degree in Business, he enlisted in the United States Navy and served in several locations but was stationed specifically on the USS Essex during the Cuban Missile Crisis. Dick then completed his education with an MBA at The University of Dallas.

Dick worked for the company A.S. Hanson in Dallas, Texas and was offered a position with the company as head of Human Resources and relocated to their Headquarters in Chicago, Illinois. During his Tenure at the company, he was served on the Board of Directors before taking an early retirement. Dick and his partner, Tim Hargus of Dallas, Texas, then moved to Savannah, Georgia and purchased the Ballastone Inn. Later, Dick and Tim acquired other properties including Manor House Bed & Breakfast, and Savannah Station.

Dick was well known for his love of animals and was on the board of the Humane Society of Savannah, as well as having been a founding member of Friends of Animals of the Coastal Empire.

Dick and Tim found a wonderful summer home in New Hope, Pennsylvania, called Rolling Green Farm circa 1748, where Dick spent his summers and became an intricate part of the New Hope Community, including being named Citizen of the Year.

Dick Passed away peacefully at home, with his cat Maggie in his arms.

He is proceeded by his brother Don G. Carlson.

A memorial service will be held at a later date.

In lieu of flowers, the family requests that remembrances be made to the Humane Society for Greater Savannah, 7215 Sallie Mood Drive, Savannah, Georgia 31406 or to One Love Animal Rescue, Inc. 463 Johnny Mercer Blvd, Ste B7 #142, Savannah, GA 31410.

It is clear that many will be coming back in the resurrection . John 5:28,29. How encouraging that people who didn’t Know the wonderful hope for paradise will have a chance to live without the influence of this world. Dick loved the beautiful creation, especially ,Maggie. Can’t help but love the Creator of all good things. It will be wonderful in paradise when the Tigers will be tame. Isaiah 11:6-9 Originally ,people could have lived forever in perfection if they listened to their Heavenly Father. After experiencing the miracle of the resurrection in paradise, all will be motivated to serve God forever. Please enjoy: “Enjoy Life Forever”, JW.org Sincerely, Sandy Wirfs

I was so saddened to hear of Dick's passing. He was a remarkable person, My prayers go out to Tim and the family.