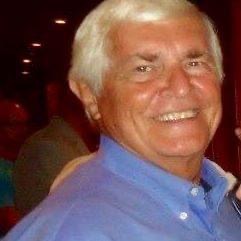 Dana Stanton Helmly, 85, passed away Thursday, September 2, 2021, at his residence in the loving care of his wife, Patricia New Helmly.

Dana was born in Savannah, Georgia on May 15, 1936. He was preceded in death by his parents, Hugh Lee Helmly and Edna Stanton Helmly.

He was a graduate of Commercial High School, class of 1954, and was the first recipient of the Ashley Dearing Sports Award. He attended Armstrong State College where he played basketball for 2 years. Dana served in the U.S. Naval Reserves after graduating from Armstrong with a business degree.

Dana, also known as “The Silver Fox”, was in the transportation industry his entire career.  After working for numerous companies, he successfully opened his own transportation and trucking company. He was president of the Savannah Traffic Club and a member of Wilmington Island Presbyterian Church.

A memorial graveside service will be held at 4:00 p.m., Wednesday, September 8, 2021, at the Joanne H. Roberts Memorial Garden at Wilmington Island Presbyterian Church.

Remembrances can be made to Wilmington Island Presbyterian Church, 450 North Cromwell Rd., Savannah, Ga 31410. The family would like to thank Jamila Harris for her care in his final days.

Dana was always such a nice person and will be missed. Prayers for the family.

Dana, was a fabulous friend to me and to so many. So deeply missed just knowing you’ve passed away. I hope you’re with Billy and sharing many laughs again. RIP my sweet friend.

Sorry to see that my old friend has passed away. Lot of good memories from transportation days. Rest In Peace old buddy!

We are so sorry to hear of Dana’s passing. Our love, thoughts, and prayers are with Patricia and the children as well as with his brothers Hugh (Margaret) and Neal (Brenda) and their children. Dana will be sorely missed by all who knew and loved him. -Wanda and granddaughter Sadie

We are so sorry to hear about Dana, Patricia. We also send our condolences to your family Stan, Karen, and Stewart. We loved this family which was near us when we were all young. Wish we had spent more years together.

Sorry for your loss. Dana was a good man!

I have been out of the office and just returned today. Just learned of your Father's passing. My heart goes out to you and your family. You will be in my prayers.

Dear Patricia and family - So sad to hear the news. Dana was always so much fun - I will cherish the memories! Hugs to all of you.