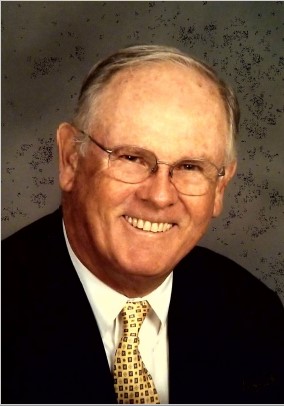 TO VIEW A LIVESTREAMING OF THE SERVICE, PLEASE CLICK ON THE FOLLOWING LINK.

Chip was born in Meadville, PA to Elliot Ralph Ingram and Margaret Harris.  He attended Meadville High School, where he was a starter on the high school basketball team.  In his off time, he was an avid golfer and hunter.  Chip then attended The College of William & Mary on golf and basketball scholarships.  During his junior year, he was given the opportunity to go on the PGA tour.  After time on the tour, he returned to William & Mary where he finished his degree in Economics.

After college, Chip was hired by American Hospital Supply where he traveled the US participating in the development of the first spinal anesthesia tray.  He continued playing golf, where he met his future boss and mentor.  Chip then went to work for what is now a division of International Paper, thus began his foray into industrial packaging.

In 1988, Chip married Diane.  They each brought a daughter into the relationship.  In 1989, Chip and Diane started their own packaging company.  The company grew exponentially under their leadership and is currently operating as MSI Packaging.

In 2003, Chip and Diane retired to The Landings, a community Chip had been familiar with since the 1970s.  Chip continued to play golf in retirement.  He also enjoyed shooting at the Forest City Gun Club and was a member of Skidaway Island United Methodist Church.

Chip is survived by his wife, Diane, his daughters, Dawn J Ingram of Savannah and Lindsay Barron of Parker, Colorado, and his grandchildren, Joseph and Chrissy Elliott of Parker, Colorado.  He is also survived by family members, Bruce Ford of Dayton, Indiana, and Tiffany and Maverik Freeman of Lafayette, Indiana.

A memorial service will be held at the Whitefield Chapel on the campus of Bethesda Academy at 2pm on Friday August 6, 2021.  Celebration of life to follow at the Palmetto Club Ballroom at The Landings.

May the Lord comfort your family as you walk through this difficult time. Chip will be sorely missed! He was an amazing man with a heart of gold! We have all been blessed knowing him.

Thinking of you and your family.

Diane, I am so sorry to hear about the passing of Chip. He was such a nice man and one of my favorite customer. Hugs to you and family.

Diane - so sorry to hear about your husband's passing. My thoughts and prayers are with you and your family. Lorraine

Sending my love and prayers to you and your family on the passing of Chip.

Just heard this devestating news of Chip's passing. There are no words to express my sorrow. Please know Diane, you and the family, are in my heart and in my prayers.

Diane, so sorry to hear about Chips passing. We enjoyed knowing him and doing business with him. My thoughts and prayers go out to you snd your family. Miss you my friend.

Diana, Deepest Sympathy to you and your family. My heart aches for you and I am praying for some kind of peace during this difficult time. Love Paulette Bomberger

Diane, So sorry to hear about Chip. Sorry we cant make the funeral but Sharon & I both have Covid. Our thoughts and prayers are with you and your family. Bill & Sharon

Diane, Dawn and Linz. Sending massive prayers, hugs and love to you all in your time of loss. Chip touched many lives so his memory will stay in our hearts forever. Praying that God hold you all and that you find peace.