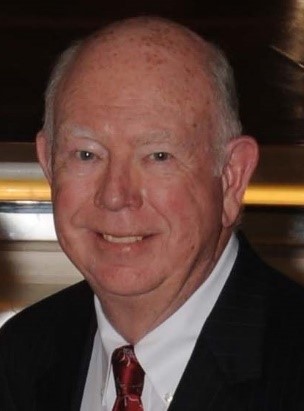 Tom Sharp died June 17, 2021, at his home in Savannah, Georgia.  He was 85.  Thomas Martin Sharp was born on May 13, 1936, in Sioux Falls, SD to Thomas Bernard Sharp and Anne (nee Finnerty) Sharp.  He grew up in South Dakota, Minnesota, and Iowa, and attended Iowa State University where he received Bachelor of Science degrees in Industrial Engineering and Industrial Administration in 1958.  At Iowa State he met Mary Catherine McNally and they were married in her hometown of Grinnell, IA on December 26, 1960.  They recently celebrated their 60th Wedding Anniversary.

In addition to his wife, he is survived by three sons: Michael (Julie) of Omaha, NE, David of Clarendon Hills, IL, and John (Christine) of San Diego, CA; six grandchildren (Megan, Colleen, Katie, Steve, Suzanne and David), his brother Bernie and sister Pat, and his nieces and nephews.  His wife and sons were with him when he passed away.

Tom served in the military with the U.S. Signal Corp. He worked for IBM for 35 years in management and executive positions in sales, marketing, product development and consulting, including five years based in Asia.  He retired from the IBM Consulting Group in 1994 and then was an independent consultant for several years.  He was a guest lecturer at Dartmouth’s Amos Tuck School, the University of Nebraska, and Georgia Southern University on the airline industry, international marketing, and information technology.  During his career he lived in Lincoln, NE, Minneapolis, MN, Fargo, ND, New Canaan, CT, and Tokyo, Japan before moving to Savannah after retiring.  Tom and Mary lived in The Landings on Skidaway Island for 25 years in a home he worked with the builder to design.

In Savannah, Tom was active with The Landings Association in various roles, was a member of Kiwanis, conducted mediation for the Savannah court system, served as the Georgia Ombudsman Director for ESGR (Employer Support of the Guard and Reserve), and was on the board of the Savannah Early Childhood Foundation.  He also served the Republican Party in Georgia at the local, county and state levels. Tom was an avid golfer for much of his life and travelled extensively around the world for both business and pleasure.

A private Mass will be held at St. James Catholic Church.

Mary, I am so very sorry for your loss. Tom was a beautiful soul I really enjoyed Bible Study with him. You and your family are in my prayers.