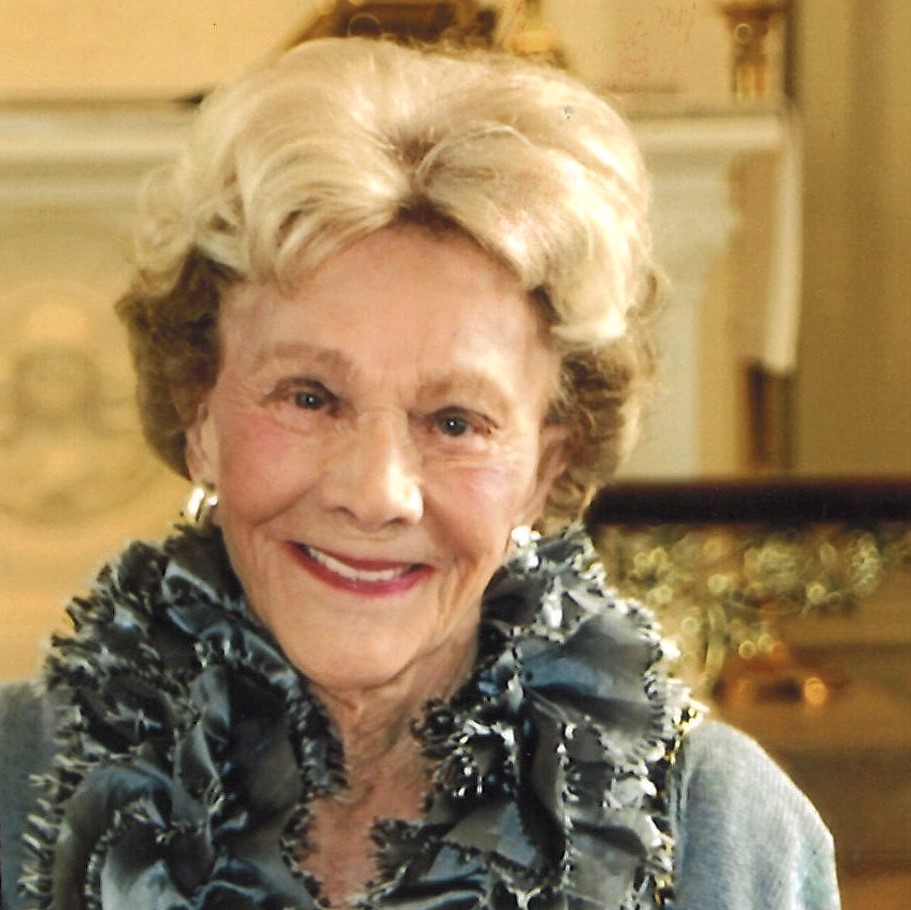 Aline Marie-Beatrice Lapin Callahan died peacefully on Sunday, May 16, 2021 in Savannah, Georgia.  She was 100 years old. Aline was born in Rabat, French Morocco May 9,1921 to French parents from Savoie, France, noted pioneer physician Monsieur Le Docteur Joseph Louis Charles Edmond Lapin and Madame, nee Renee-Jeanne Revelin. With his family, Dr. Lapin had moved to Morocco to initiate and fulfill his dream of establishing free TB clinics. Mrs. Callahan was the Goddaughter of French Field Marshall Louis Hubert Lyautey, the highest ranking official representative of France in Morocco. She was educated at the Couvent du Sacre Coeur, a boarding school in Grenoble, France and the Lycee Francais de Jeunes Filles in Rabat.

When the Allies liberated North Africa at the end of 1942, they established a naval base near Rabat. Over several years Aline met and dated a young American flight officer. They were married in Morocco in 1945 and Aline emigrated to the U.S. in 1946 as a war bride when her new husband returned to the states. While raising their two daughters, they lived in Key West, Florida, Chicago, Illinois, and Madison, Wisconsin. After the marriage dissolved, Aline relocated to Atlanta where she began a career working for Air France and then Lufthansa German Airlines traveling extensively around the world and making many lifelong friends.

Several years later Aline met William Park Callahan, the love of her life. They soon realized many mutual interests in art, music, great food and all things French.  Aline’s children loved Park as much as he loved them. Park and Aline were married in 1967.

Aline and Park visited Savannah in 1978, fell in love with the historic district, and purchased a lovely house on Jones Street, their home for over 30 years. They joined Christ Church Episcopal shortly after their arrival.  Aline was involved with the Emmaus House from its inception and the Savannah Tour of Homes and Gardens as well as other ministries of the church. She also volunteered with the Garden Club of Savannah, the Telfair Academy and the Record Club. Mrs. Callahan loved nature and used to say that her later years spent living near the water, watching the sun rise over the marsh and remembering the glorious sunsets over Rabat made her the happiest. She often said it was a privilege to have lived long enough to understand how little is needed to make one happy and to appreciate the beauty that surrounds us.

Aline is predeceased by her beloved husband of 48 years, William Park Callahan (2016), her son-in-law Royce Roberts DVM (2018), and grandson Michael Allen (2020). She is survived by her daughter, Sherry Anne Giryotas Shore, and son-in-law, Phillip Shore, of Dallas, Texas and Three Oaks, Michigan, and her daughter, Karen Lee Giryotas Roberts, of Fredericksburg, Texas. In addition, she leaves grandson, Jason Healy and his wife Carmen Healy of Sterling, Illinois, grandson Derek Healy, three great-grandchildren, Laura, Cody and Liam Healy all of Chicago, Illinois, and a niece and several nephews in France.

The family would like to thank Aline’s doctors and caregivers who watched over her for so many years. Mrs. Callahan wanted to thank especially her remarkable, long-time caregivers Suze Louis-Jean and Patricia Johnson of Home Instead, the wonderful staff at Savannah Square, especially Karen, Linda, Jamal and the kitchen staff, and the skilled nursing staff. She said she felt blessed to be surrounded by such dedicated caregivers, staff and special neighbors Pat Zugehar and Anita Clay, her wonderful friends and loving church family. In her final days, the staff of the Care Patrol, the Trio Unit of Thrive on Skidaway, Home Instead, and Pruitt Hospice provided compassionate care.

A memorial service will be held at Christ Church Episcopal, 28 Bull Street, in Savannah, on Thursday, June 10 at 11:00 a.m. Covid 19 mask and safe distance protocols will be observed. The burial in Bonaventure Cemetery will be private.

In lieu of flowers, which Mrs. Callahan loved, her family requests that any memorial donations be made to Christ Church Episcopal, 18 Abercorn Street, Savannah, GA  31401 (https://christchurchsavannah.org/giving) or to the Humane Society of Greater Savannah, 7215 Sallie Mood Drive, Savannah, GA 31406 (https://www.humanesocietysav.org/make-a-donation).

Aline so beautiful and elegant and wise , I’ve missed her since leaving downtown and will continue to miss her . She was an inspiration in many ways to many people.

Our Deepest Sympathy To you All on The Passing Of your Beloved Mother/ Grandmother. Saying Goodbye Is Never Easy, but We Can Take Solace In Knowing, Although, We May Not Be Able To See or Touch Them, That Their Memories Are Never Far From Our Hearts. May The Love, and Comfort Of The Almighty Surrounds, and Guide You All Through The Days Ahead. All Of Our Love. From The Louis Jean Family.

Aline was such an elegant lady, and delightful to know. Gordon and I often shared a pew at church with both Aline and Park. She will be missed.

Aline was an elegant, rare diamond who loved God and her family. It was truly a pleasure taking care of her and we'll miss her. Her Home Instead Family

As a former caregiver from Savannah Square's Health Center I can tell you Mrs. Callahan will be greatly missed by many. What an incredible 100 years she lived.. May God bless her family..