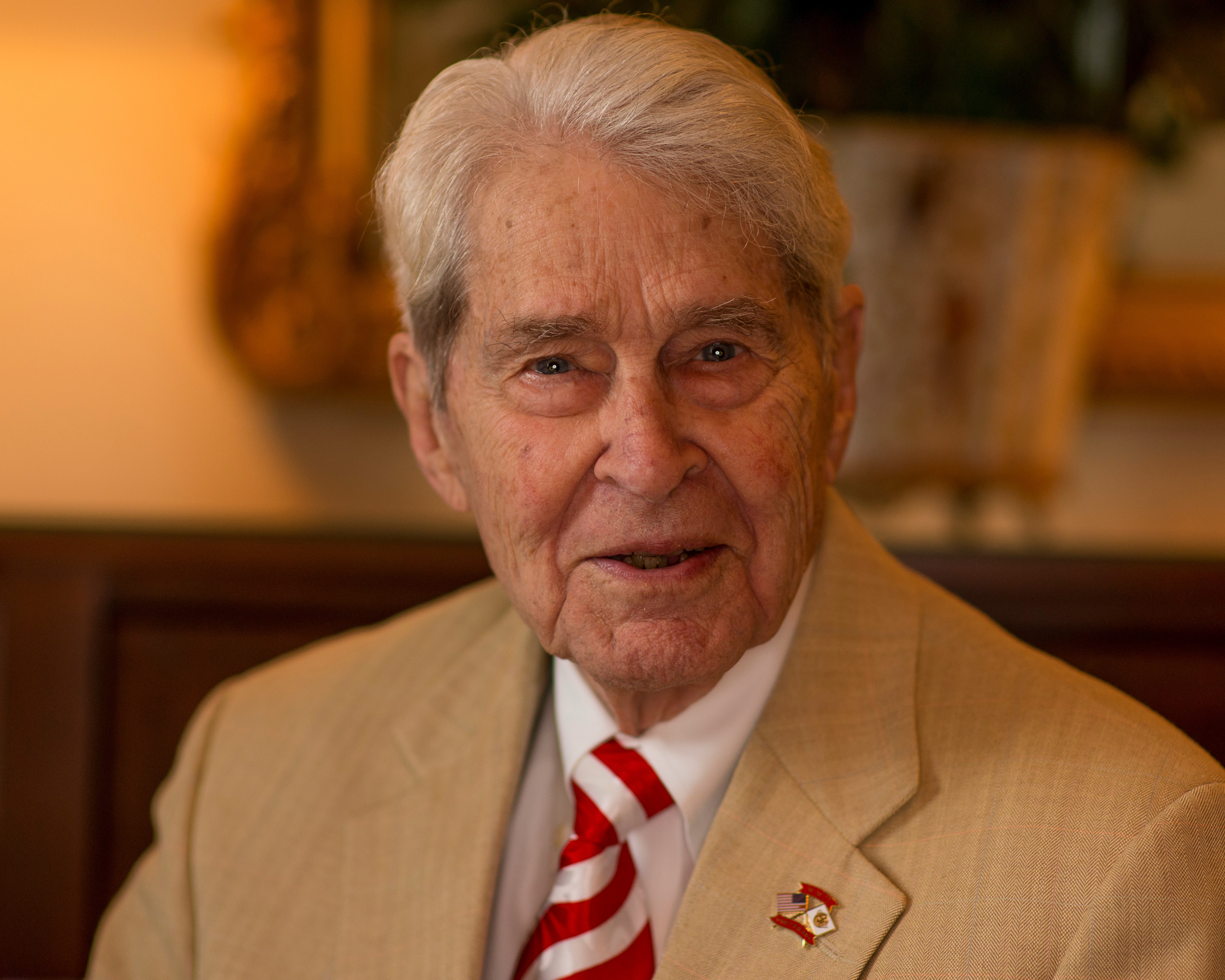 The longtime Savannah resident was born in Marshallville, GA on Dec. 29, 1918.  He was the son of Annita R. Freeman and Reverend Horace T. Freeman, a well-known Methodist minister who was district superintendent in Savannah in the late 1940s.

Dr. Freeman was a graduate of Emory University where he received his B.S. degree in 1939 and his M.D. degree in 1943.  As an undergraduate, he was a member of the Sigma Alpha Epsilon (SAE) fraternity.  He then went on to complete a medical internship at Emory and a surgical residency at Atlanta’s VA hospital.  During World War II, he served as  lieutenant in the U.S. Navy medical corps in the Pacific theater.  After the war, he became board certified in general surgery at Emory.  Dr. Freeman served as historian of the George K. Gannam American Legion Post 184 and was a member of Patrick Anthony Russell VFW Post 4392.  In 2012, he was grand marshal of the Veterans Day parade.

Dr. Tom Freeman was a well-known and respected surgeon, who served the patients at St. Joseph’s/Candler hospitals from 1950 until semi-retirement in 1998 and contributed much to the medical community.  He was the first to establish a regular thoracic surgical practice in Savannah and the first to perform surgery for patent ductus arteriosus (PDA).  He performed the first carotid artery surgery for stroke in Georgia and followed with 2,000 carotid surgery procedures.  He executed all chest surgery in Savannah for 2 years until another board certified thoracic surgeon came to town. Dr. Freeman performed essentially all vascular surgery in Savannah prior to the development of grafts where he and the surgical staff would make their own grafts out of a sheet of nylon mesh in the operating room, where each graft was sewn on a sewing machine, sterilized, and then used to replace the aorta.  He was a pioneer in the treatment of abdominal aortic aneurysms and in progression of carotid surgery; completing the first carotid endarterectomy in the southeast and developing shunts and endarterectomy techniques using hypothermia.  He published papers in national journals on general and vascular surgery and surgical treatment of male pseudohermaphroditism.  It is not difficult to understand Dr. Freeman’s notable place in surgical history, as he is listed in the Who’s Who in America for his work in carotid surgery and was a member of The National Register of Prominent Americans and International Notables for the Medical Sciences and Lecturers.  His childhood goal was always to become a doctor; he genuinely loved his work and cared deeply for each and every patient.

A leader and mentor to many, Dr. Freeman served the medical community at various times throughout his career as president of the Georgia Medical Society, chief of the Candler Hospital Medical Staff, chairman of the Candler surgery department, member of the Candler Hospital Foundation board of directors, a member of the committee charged with the job of selecting the site for construction of Memorial (Health) Medical Center, and member of the Memorial teaching staff.  Dr. Freeman was thrilled to be honored in many ways throughout his medical career, but was especially proud of two particular awards.   He was the 2005 recipient of The Medical Association of Georgia’s prestigious Hardman Cup award, presented for the achievement of anyone who, “in the judgment of the association has solved any outstanding problem in the public health or made any discovery in surgery or medicine or such contribution to the science of medicine, including but not limited to excellence in the field of medical education.”  He also was incredibly proud of The Physician Legends of St. Joseph/Candler Health System award received on October 20, 2009 alongside Dr. Julian Quattlebaum, one of his longtime best friends and colleagues.  This award was given for “innovations defining new frontiers and greatly enhancing the quality of patient care.”

Outside of the academic world, he was an amazing athlete.  He loved all sports and could quote scores from baseball, basketball, and football going back 50 years and list highlights of every game. At age 20, from 1939-40, he was athletic director at Emory Junior College and he was the only student at Emory University to win the trophy for best all-around athlete for more than one year.  He also earned the Sigma Alpha Epsilon award for sports and scholarship.  He was later inducted into the Emory Sports Hall of Fame for his outstanding athleticism in football, basketball, baseball, softball, tennis, badminton, volleyball, water polo, swimming, bowling, cross-country, track and welter-weight boxing.  He was a past president and member of the Emory Sports Hall of Fame and a past president of the Savannah Golf Club. Freeman began attending The Masters golf tournament in 1939 and continued for decades.  He often said that for the past 35 years, one of the best days of the year was taking his youngest daughter to the tournament and spending their day together.  He not only loved watching golf, but he also loved playing golf.

Retirement at age 80 allowed him to play more golf than ever, until he threw his back out doing so.  Unable to play golf, he went back to “work” because he said working would keep him alive. Going to Candler Hospital every day as he got older was such a blessing because it challenged him mentally and kept him sharp.  He always felt “at home” at the hospital and loved nothing more than to walk the halls while smoking his pipe.  He also would venture into the Candler doctors’ lounge to strike up a conversation with anyone who was willing to listen.  His stories always began with “looka he-ya” followed by a big smile and an engaging story.  He would follow that by saying “come on” as if he was in disbelief of something that was said.  He was a character and the finest Southern gentleman.  The only other thing Dr. Freeman loved to do, maybe even more than golf, was visiting the Florida dog tracks.  Accompanied by family, friends, and colleagues, he would teach them the art of betting.  He didn’t always win, but he got much enjoyment out of just being there and especially taking someone for the first time.  He also was an avid University of Georgia football fan. If he didn’t like the way a game was going, he would get in his car and drive around town smoking his pipe and listening to the game on the car radio. He would get too anxious sitting and watching at home, so a car ride always would calm his nerves.  He loved his friends, his family and the many beloved pets he had through the years.  His idea of a relaxing afternoon was sitting back in his recliner with the family dog in his lap, smoking his pipe and having the Sunday newspaper in hand, just before dozing off for a nap.  Rest in peace, you deserve it!

A private family service was held in the Greenwich section of Bonaventure cemetery.

To the Freeman Family: Dr. Freeman was such a larger-than-life personality, it was easy to love him. Some of my fondest memories are watching him tell stories of his escapades with Harvey Morgan and "Dooley" and the smiles they brought. John had tremendous respect and admiration for his surgical talents, and was proud to be one of his surgery group partners. Tom touched SO many lives--he will truly be missed. Sending prayers of comfort for your family as you celebrate his well-lived life. Sincerely, Jeanne Hungerpiller

It was my honour and privilege to work with Tom Freeman for many years and to have him as a beloved friend. What a splendid man!

Worked for Dr Freeman for 10 years at Surgical Associates...the best 10 years ever...a fine surgeon. Hope you Dr Gongaware Dr Hungerpiller and Dr Morgan are sharing stories that made us all laugh !! Thoughts and prayers for all of his family.

I have such fond memories of working in the OR with Dr. Freeman. Not only was he a terrific surgeon, he was funny! He always had me laughing. He was also very kind. A true gem of a man.

Lauren, I was so deeply sorry to hear your father’s recent passing. It warmed my heart to open the morning newspaper to read a beautiful article about his amazing life. I remember his love for you being at UGA. May you find peace and love in all of the beautiful memories you shared. Much love, Christina Mobley Varnedoe

It was an honor and a privilege to have known this wonderful man. Every conversation was enlightening from such a remarkable yet humble man. His legend lives on.

Tom was one of our best friends! He went to Emory with my dad dr horace anderson love ❤️ Tom

Sending love to your family. It was a blessing that our mutual friend, Doug Andrews, regularly invited Tom to join Tybee Light Sail & Power Squadron's festive events. We loved his fellowship and are grateful for his life and legacy.

I had the pleasure of working with Dr.Freedman in day surgery at Candler Hospital. He was always such a gentleman and kind to his patients. He was one of the best surgeons in this city. To his family my heart felt condolences to you.As believers we know that to be absent from the body is to be present with the Lord

Dr, Tom - We always loved you at our Legion and VFW Meetings. You're a true American Hero in so many ways, not only from the war, but in everything you did!!! Rest in Peace, my friend!!!

I was blessed to work with Dr.Freeman for many years in the OR at St.Josephs.He was kind,funny and an expert surgeon. Sympathy to his family and may your memories sustain you at this sad time.

In the short time that I lived in Savannah, I was able to connect with Grandad a handful of times. Looking back now, I only wish I had spent more time with him. We sat together a few times in his home and also drove to the hospital for breakfast a couple of times. From my perspective he was a celebrity, father figure, and also a friend to talk to for everyone at the hospital. I've always admired him and his accomplishments and appreciated his sense of humor. My wife and I were last able to see him, I believe in 2019, at his nursing home and we certainly cherish that visit. I hope all of the family is doing well and, considering his legacy, I think there should be a road in Savannah named in his honor! Much love, Andrew Freeman (Chip and Rebecca's son)

My condolences to the family and friends. We never met but I knew him through my dad Earnest G. Freeman. They were cousins.

I worked at Candler for many years and always could tell when Dr Freeman was near - you could smell that pipe!! What a wonderful, dear, dear, man he was!

I worked at Candler for many years and always could tell when Dr Freeman was near - you could smell that pipe!! What a wonderful, dear, dear, man he was!