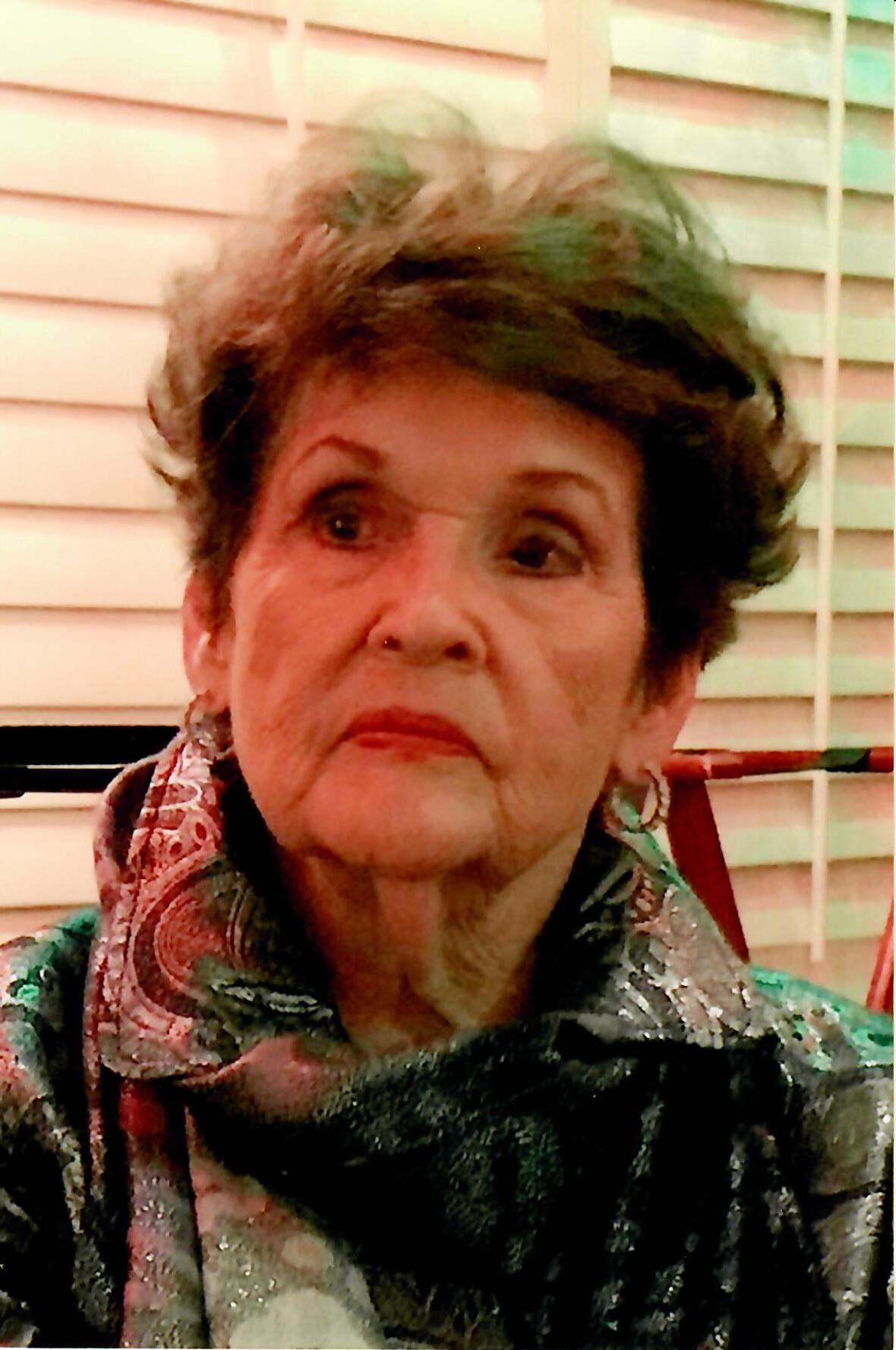 Bettie Anderson Shore, 92, Matriarch of the Savannah Shore Family and native and lifelong resident of Savannah passed away on February 20, 2021.

Bettie was born in Savannah, Georgia on February 16, 1929, and graduated from Savannah High School in 1947.
In 1948, she met and married the love of her life, Claude M. Shore, Senior at St. John’s Episcopal Church. Bettie became the bookkeeper for the various Shore family businesses until their son, Claude, Jr. was born three years later. She kept the books for Shore’s Supermarket on Henry Street. Bettie subsequently performed the same bookkeeping task for the Little “S” Convenience Stores throughout Savannah and Hinesville.

Years later, Bettie and Claude moved their church membership to St. Thomas Episcopal Church.
Bettie became a devoted volunteer serving on the Altar Guild and working at the St. Thomas Thrift Store, where she was a well-known shopper as well. Bettie was a member of the Savannah Junior Women’s League, now known as the Junior League of Savannah; and a supporter of the Savannah Christian Women’s Club, Savannah Symphony Society, Savannah Friends of Music, and Savannah Republican Women’s Club.

As a result of Bettie’s devoted association with the Savannah Junior Women’s League, she became involved in the Beta Sigma Phi Social and Civic Sorority under the direction of Lila Mae Kicklighter.  Bettie performed whatever tasks she was assigned, including working on the Ways and Means Committee and serving as a fashion model on a regular basis. The funds thus raised went to support the Kicklighter School for Challenged Children. Bettie was proud of her involvement and work in the sorority during the fifties, sixties, and seventies. The volunteers were on the ground floor of a significant effort which is now known as the Kicklighter Resource Center.

After her graduation from Savannah High School, Bettie was concerned that she and her classmates had lost touch with one another; therefore, Bettie and a few others formed a steering committee to attract classmates to a reunion party. The party was such a smashing success, the steering committee became a permanent fixture. The class met every five years and had way too much fun. The reunion began in 1967 and held their last soirée in 2007.

Bettie and Claude shared a great love of fishing. They built a home on the Savannah Intracoastal Waterway to allow them unfettered access to the river and the wonderful scenery. On most weekends, weather permitting, you could find them fishing the coastal areas and rivers, streams, and creeks. Bettie and Claude probably thought they had gone to heaven.

Bettie’s legacy must reflect her nearly life-long pursuit of excellence at the Bridge table. She was a very fine and polished bridge payer, and a member of the American Contract Bridge League as a Silver Life Master for over thirty-five years. Bettie played bridge at the highest levels for over sixty years, and thus developed and nurtured many life-long friendships while playing the game she loved.

A caring and loving mother, aunt, and cousin, who was just full of life, Bettie was affectionately called BeBe by her grandchildren. With her loving spirit and generous nature, many friends and close family also thought of her as their second mother.
Bettie always had a kind word for everyone, whether they deserved it or not, and it was a tribute to her loving nature that she was held in such high regard. She was a beautiful woman inside and out.

The family would like to thank Spanish Oaks Hospice for their compassionate care. Also, Dorothy Johnson and Erica Simmons for their devotion and care given to their mother.

A private graveside service will be held in Greenwich section of Bonaventure Cemetery.

A celebration of life will be held when it is appropriate to gather in large groups once again.

Wishing you peace at this difficult time.

Bettie, Glad we got to know you. We enjoyed every minute. Condolences to the family. We know you loved her. Clark and Janet

Bettie was my friend for over thirty-five years and was one of the people who welcomed me into the world of duplicate bridge. You could never go anywhere in Savannah without having someone come up to say hello to "Miss Bettie". If I was ever able to introduce her to someone new, they could not believe it when I later told them her age. She literally looked the same since the first time that I met her. Her beauty-both inner and outer- was ageless! I will truly miss this one of a kind friend.

She will be missed what a great lady

Miss. Bettie was truly one of the sweetest, strongest, and smartest ladies I have ever known. Her southern charm, exquisite persona, and humbleness made everyone feel blessed to know her. Her absence in our lives here forth will truly be felt. However, I know when I am out upon the ocean, I will feel her presence, embrace our memories, and be thankful she was part of my life. Miss. Bettie, the next Sheepshead is for you❤️

The world has lost a woman who was not only beautiful in looks, but, more importantly, in her heart. She had the ability and desire to make everyone feel welcome in any situation, she was giving and encouraging, and she always had a cheerful demeanor. She will be missed by all. Lennie, Claude, and family, our hearts and thoughts are with you.

Ms. Bettie was always such a delight. I thoroughly enjoyed speaking with her on the phone. She was always so kind-hearted. She will be greatly missed. May she rest in peace. God bless her family.

So very sorry to hear this, Mrs. Shore was a beautiful person both inside and out. My deepest sympathy...

Always a party when she was present...she will be missed as she lit up every gathering...a beautiful lady ,inside and out...!!

We are so sorry to learn of the passing of your mom. Bettie was such a sweet and gentile person. Our thoughts and prayers are with you all. Deborah & Shane

Our condolences & prayers go out to the family during this time.

Precious BeBe was a bright light to so, so many; myself included. What a joy and privilege to know her, spend time with her, and be her friend! We will all miss Bettie tremendously. Prayers for peace and comfort to her wonderful and loving family.

Lennie and Leon, We are so sorry to hear of Bettie's passing, she was such a wonderful person who we both loved very much, we feel fortunate to have had the great experience of knowing her and enjoying her company, she will truly be missed. We will keep Bettie and all of you in our prayers. John and Karen

I am so very for your loss. I always enjoyed seeing Bettie when I was visiting Harry & Wese in Vernonview. She was always very sweet and kind to me.

My heart is heavy for the loved ones Betty left behind but find comfort in knowing she is in a heavenly, pain free peace. Renee, thank you for sharing Betty with "the girls". I know Georgia and Betty haven't stopped talking since they were reunited. Love and prayers to her wonderful family.

We are so terribly sorry for your loss....we love you and are keeping you in our prayers....Jana & Mike

So sorry, Bettie was such a nice person.

Lennie, my thoughts are with you. Your Mom was a beautiful lady.

Dear Lennie, Claude and family, Your mother will be missed. She was beautiful both outside and in. Always greeted you with a smile and in our memory always.

Our deepest sympathy for the loss of this lovely lady. We will all miss her kind soul. May God bring you all comfort in this difficult time. You are in our prayers.