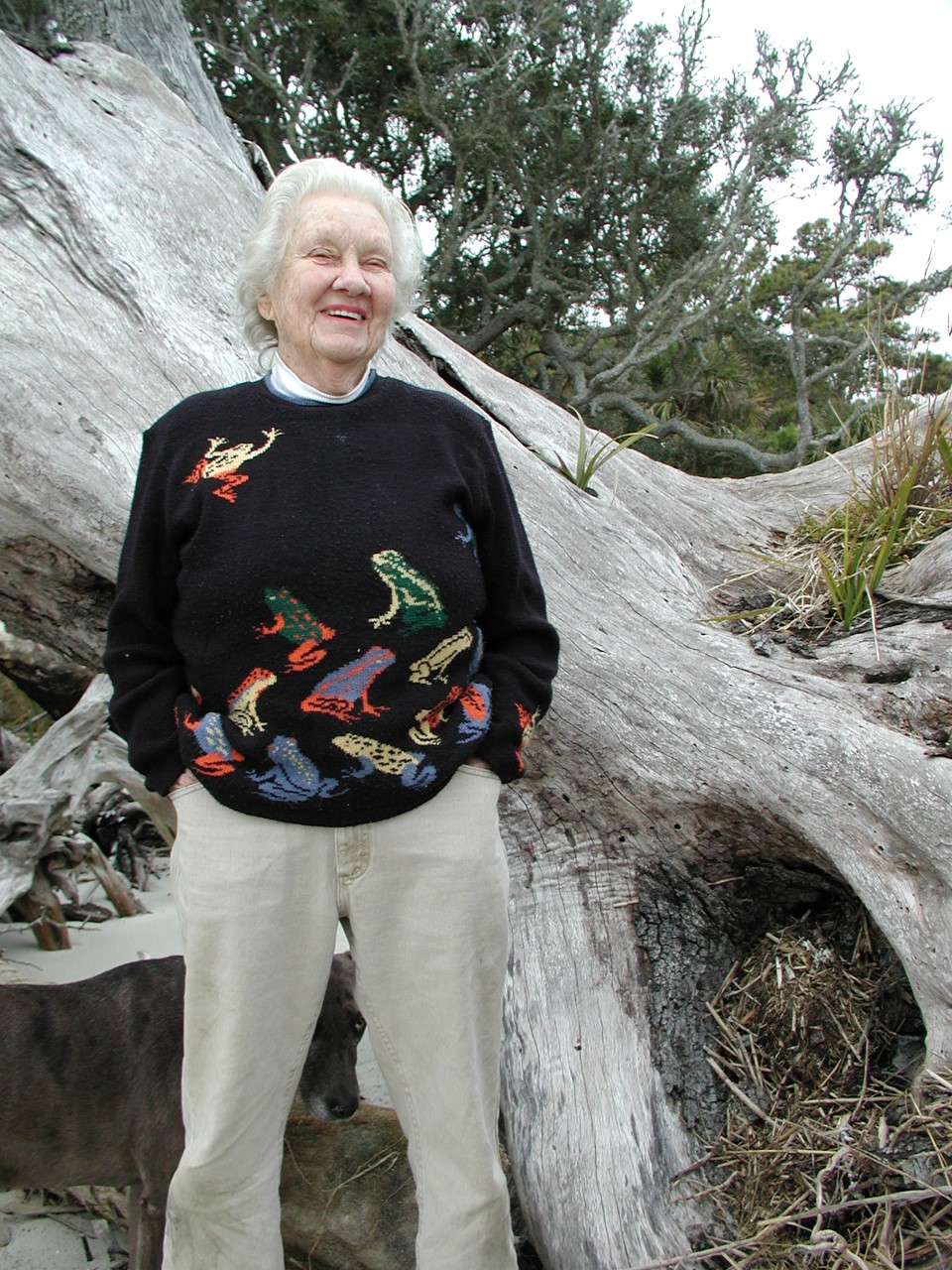 Eleanor Torrey West, known to her friends as “Sandy,” was born on January 17, 1913, and died on January 17, 2021, her 108th birthday.  While her life spanned an encyclopedia of world events, her own accomplishments in those 108 years affected the lives of many, including her family, countless friends, and the citizens of the State of Georgia.

She was the daughter of Henry Norton and Nell Ford Torrey of Grosse Pointe, Michigan, and grew up between there and Savannah, Georgia. Her relationship with Ossabaw Island—one of the great loves of her life—began when her parents purchased the island in 1924.

West dedicated her life to preserving and sharing the island with others. She co-founded the Ossabaw Island Project, which brought professionals together from typically diverse fields to work in the unique environment of Ossabaw. She also started the Genesis Project, which invited young people to the island to live in a sustainable community and to work on individual projects in the sciences and the arts. Both were pioneering efforts of their kind. She was instrumental in working with owners of Georgia’s other barrier islands to raise awareness around their unique cultural, ecological, and scientific importance. Ossabaw was eventually conveyed to the State of Georgia as its first heritage Trust, thus preserving the pristine natural beauty and cultural heritage of the island for all Georgians.

No one can speak of West’s life without mentioning her love of animals. She was a tireless protector of all species and worked to ensure that their habitats remained safe.

There are few people who have lived 108 years and fewer still who have used their time as wisely as she did.  For all Georgians, Eleanor West has preserved a special part of their state; for her friends, she has inspired loyalty and devotion; and for her family she has been a beacon of love and hope.

A memorial will be held when it is safe to do so.

In lieu of flowers, the family has requested that remembrances be made in the form of contributions of the Humane Society for Greater Savannah, 7215 Sallie Mood Drive, Savannah, Georgia 31406.

It's been amazing to hear the stories of Ossabaw and Mrs. West over the last several years. She has left a gift to our state (and country) that few have the privilege to give. We are so grateful. And we are so sorry to see her finish her walk on earth. We are praying for your whole family and the extended "Ossabaw Family".

Thank you, Ms West for all your hard work!

My thoughts are with you at this time. I’ve been going to Ossabaw for 20+ years so have had the pleasure to get to know Sandy. She will be remembered with a smile.

I have been told a lots of stories about Mrs. Torrie West by my father-in-law who lived and worked on Ossabaw Island back in the 1960's . He talked about rounding up the cattle and loading then on a barge and taking cattle to Savannah to Meting Brothers. Franklin Lariscy as his name. Thanks for all you have for my family and the state of Georgia.

I just heard of the passing of Eleanor, and am saddened. From what I know, I just gave to say, what a lady. I’m the director of the Ford-MacNichol Home in Wyandotte, Michigan - a home built by her great-grandfather, John Baptiste Ford. We have a beautiful painting of Eleanor on her 16th birthday in 1929. Guests love learning about her and the family, which are all in our thoughts at this time. From myself, the staff and volunteers of the Wyandotte Museum and historical society, we send our condolences. Again, what a lady!