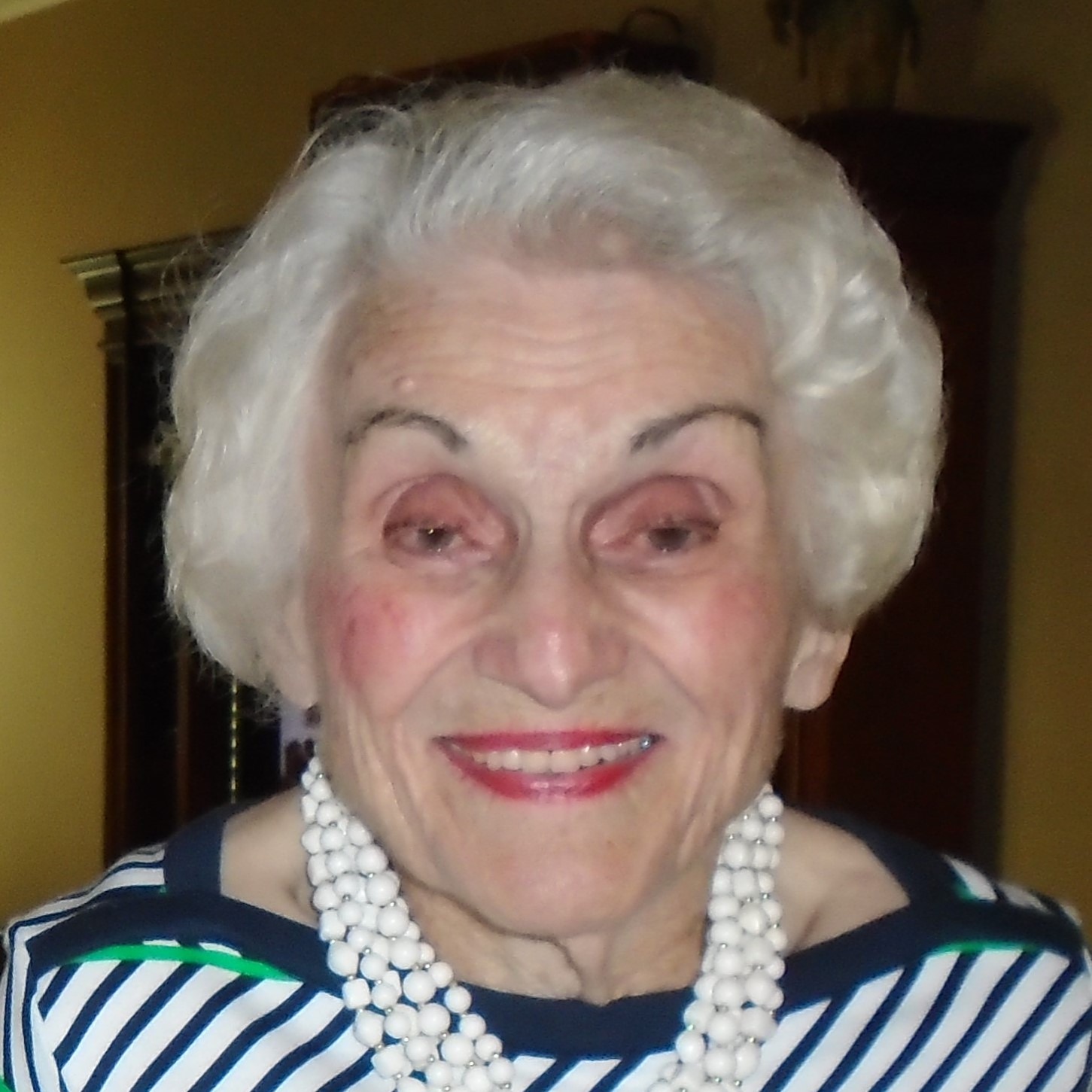 Alice Jo was a spirited Southern belle with boundless energy and creativity who influenced the lives of all around her. She was known for her heartfelt prayers, her eloquent letters, and her generosity to others less fortunate.

Alice Jo Lane grew up on a farm in Bulloch County with her parents, Mary and Emory Lane, her brother, Jones Lane, and her sister, Betty Lane. She was a child of the Depression, and she learned how to stretch a dollar, create a meal from scraps, sew her own clothes, and fashion toys with whatever materials were available on the farm. She attended Georgia Teachers College (now Georgia Southern University) and taught at Middleground School. She later trained as an X-ray technician at the Medical College of Georgia before being offered a job with Dr. John Ethridge in Valdosta, Georgia, which became her home until her recent move to Savannah two months ago.

With four young children to care and provide for, Mrs. Giddens needed to work at home, so she left health care and converted her carport into Alice in Wonderland Kindergarten, where she influenced the lives of Valdosta students for 35 years. She loved her work; the last weeks of her life, she said she’d still be teaching if she could. Her students were taught to color every bit of white space on the paper, to sing and recite poetry, and to read using phonics. For many years, the seniors of Valdosta High School who had attended her kindergarten posed for a yearbook photo on the front steps of her home at 903 Gornto Road.

Mrs. Giddens’ influence was also felt at Park Avenue United Methodist Church, where she was a charter member. She served as superintendent of elementary Sunday School, sang in the church choir, taught the Param Sunday school adult class, and sang with a group called the Keen-agers, who ministered particularly to nursing homes. For more than 20 years, she and a small group of volunteers cooked monthly for more than 100 older adults in the Valdosta area. For three dollars, she fed them a variety of Southern delicacies, such as country fried steak, broccoli and squash casseroles, ham and macaroni and cheese, and hot chicken salad, as well as bread and dessert. Each year, she contributed dozens of cans of peanut brittle to the church bazaar held by the women of Park Avenue, with patrons lining up to get a can of her famous confection.

Mrs. Giddens also performed many acts of quiet kindness, providing rides to older adults so they could attend church services, and preparing and delivering her signature spaghetti sauce and fixings for anyone in need of a lift.

But her greatest influence was on her children, who she taught to honor commitments, work hard, persevere in the face of obstacles, and be thrifty. She was a hard task-master, expecting only the best from her offspring, leading them to aspire to bigger things. She taught them to believe in the importance of faith and prayer.

Mrs. Giddens was an excellent cook who prepared outstanding family meals. She delighted her grandchildren with enormous, crisp sugar cookies, Granny’s chocolate cake for birthdays, and sourdough bread made from a starter that was 40 years old. At 94, she was still baking bread every Saturday, and it was a treat to be at her house around 4 when the hot loaves came from the oven, ready to be sliced and slathered with soft butter. Many of her recipes appear in her daughter’s cookbooks.

Mrs. Giddens particularly loved live theatre, attending all of the plays in which her daughter performed at the summer theatre at Isle of Hope United Methodist Church. She also went to many performances with the Park Avenue older adults held at Alhambra Theatre and Dining in Jacksonville. For her 70th birthday, Alice Jo and her daughter went to New York for a weekend of Broadway, where they saw Miss Saigon and The Phantom of the Opera. Car trips were often spent listening to the soundtracks of Sound of Music, Les Miserables and Fiddler on the Roof. In retirement, she was able to travel to England for the John Wesley tour and to Israel with her son as tour organizer.

Mrs. Giddens spoke her mind, using her rich vocabulary and hundreds of witty sayings, often telling her children to “put that in your pipe and smoke it” when revealing some unpleasant truth that needed to be mulled over, and describing people as “thin as a rail,” “fat as a pig” or “long in the tooth.”

Mrs. Giddens was able to remain in her beloved home in Valdosta until she was 96, thanks to the loving care of her son, Lane. The family is grateful to the staff at Fellowship Home in Valdosta for the care they provided to her for two years before her move to Savannah in October. The compassionate staff at Harmony and the services of Hospice Savannah nurses provided comfort to her during a short decline. Donations: Park Avenue United Methodist Church, food pantry fund, 100 East Park Avenue, Valdosta, Georgia, 31602, or charity of your choice.

Private graveside services coordinated by Fox and Weeks of Savannah will be held in Statesboro at Eastside Cemetery. Her son, The Rev. Jim Giddens, will officiate.

Mrs. Giddens was a woman of great faith, who had posted on her refrigerator for many years “Lord, what would you have me do today?”  She particularly loved this scripture from Isaiah 40: “Do you not know? Have you not heard? The Lord is the everlasting God, the Creator of the ends of the earth. He will not grow tired or weary, and his understanding no one can fathom. He gives strength to the weary and increases the power of the weak. Even youths grow tired and weary, and young men stumble and fall; but those who hope in the Lord will renew their strength, they will soar on wings like eagles; they will run and not grow weary, they will walk and not be faint.” Amen

Due to Covid restrictions, the family will not have a visitation.  A private family graveside service will be held in Statesboro.

Please accept our deepest sympathy on the loss of Alice Jo. She was a remarkable lady.

Ms Giddings was such a part of our family too. So blessed to have known her. Praying for peace and strength for the family. With all our love!!!

What a beautiful soul. She was my kindergarten teacher at Alice in Wonderland on Gornto Road. We did not have kindergarten in those days, but Ms. Giddens made sure that we did. I always loved going there, playing in the backyard and our piano time when she took us into her home and played for us and we all sang. She was such a blessing to so many students. Every single time I ran into her around town she remembered me and we hugged and she was always so proud of her students. God bless you Mrs. Giddens. You were loved by so many children. And You changed our lives. Love you

You are in my thoughts and prayers as you grieve for this amazing woman. You brought her to life, I so enjoyed your stories. Thank you for sharing who she was, through this beautiful obituary, and through your testimonies. I know she deservedly was very proud of you and your brothers. Love, Donna

I was serving in a "Lay Witness Mission" in a United Methodist Church in Valdosta, GA. A vibrant, in charge, positively contagious lady was moving through the halls obviously displaying a Jesus-filled heart. She introduced herself to me. I asked if she was Jim and Martha's mother. She said she was. My response was, "Of course you are." The same fruit she spread that day has been my experience with all my contact with Martha and Jim. I am sure she is working the halls of Heaven today....as grand as Heaven is, she surely is improving the atmosphere. I am grateful that God has allowed members of the Giddens family to cross my life's path.

It was an honor to care for Miss Alice. Her independent spirit and positive outlook were both inspiring and encouraging. Please accept may sincere condolences as you mourn your loss and celebrate her bountiful life. She was a precious jewel.

We extend our sympathy in the loss of Alice Jo. She was an incredible lady and touched our lives with her joyful spirit and good food (at the Hendricks Reunion)! Prayers for comfort and peace.

My condolences and deepest sympathy to all of you. I truly thank your family for allowing me the opportunity to care for your mother. She was a jewel in my eyes. I will never forget her saying " you're a good girl Charlie Brown." You will be missed beautiful angel

- Erica from Harmont at Savannah

Mrs. Giddens was a great lady. I am thankful for the lessons she taught me in life.

I was one of the lucky ones to attend kindergarten on Gornto with Mrs Giddens. Such a wonderful bright light she was always. My prayers are with the family.

Jim so sorry to hear about your mom. Our prayers are with your family !! Love Bob and Dianne

Dear Jim, I was so sorry to hear of the passing of your mother. She had such a full life sharing herself with others the blessings she received. Blessings and Prayers, Bonnie Delvers

I’m a 1982 graduate of Mrs. Giddens’ KG...What an amazing life she lived, and such a blessing to all who knew her... Praying for your family!

Heartfelt love to your family. Mrs. Giddens is a beautiful soul and a delightful southern Lady. She is an icon of charm and grace in the Valdosta community.

So very blessed to have been taught by Miss Alice Jo. So many wonderful memories. She was a treasure and one of the main reasons I teach preschool today at PAUMC. She told me to never stop teaching these sweet children about Jesus. Love her and she will be missed by all. Prayers for your family during this time

I am very blessed to have been taught by Miss Alice Jo. So many wonderful memories in her kindergarten class. She was a treasure to all she met and one of the main reasons I teach preschool today at PAUMC. She told me one day at church...”Never stop loving these sweet children and teaching them about Jesus.” She was loved by all and she will be missed. Prayers for your family during this time.

My boys had the honor of attending Alice In Wonderland and the knowledge she fed to these boys was outstanding - so sorry to hear the news tonight of the sweet ,beautiful lady passing - I know she is teaching someone something in Heaven - she defnitely has earned her Angel wings - we loved you Alice Jo Giddens