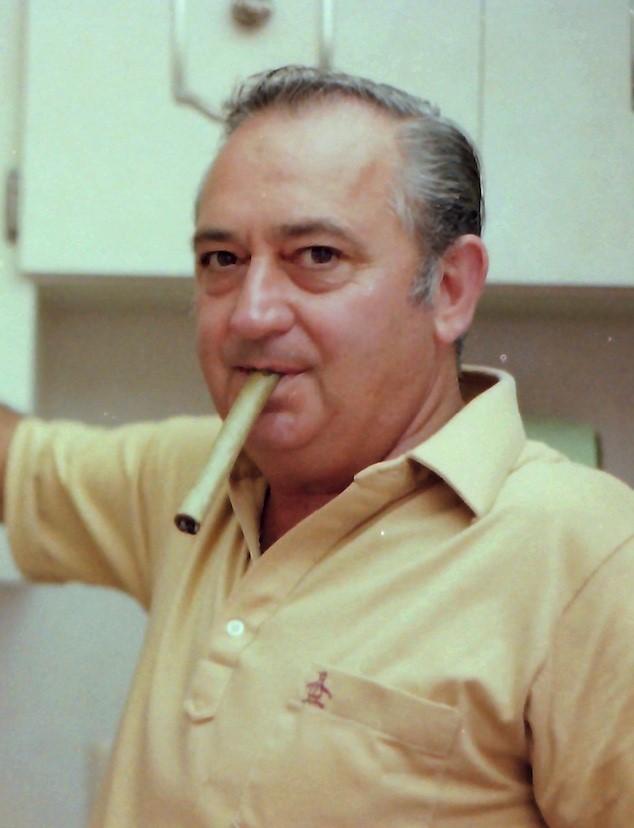 Bill was a World War II Veteran. He was always good at math and when he joined the service he was initially sent to school in Pensacola Florida to be trained as an aviation metal smith. After two weeks the Pensacola trade school was moved to Norman, Oklahoma and Bill along with 500 sailors and marines  boarded a troop train and headed to training. Bill was later transferred to Corpus Christi, Texas. Bill was a trumpet player in his high school band and he was pretty good. He was appointed bugler at the base playing revelry every morning and taps at the close of each day. He and his friends formed a small musical group playing dance music at lunch time on the base. Soon after a big band group was formed that once played back up for Gayle Russell and Frank Sinatra. Bill was honorably discharged from the Navy in 1946 and headed back home to Savannah.

Shortly after being discharged from the Navy, Bill went on a blind date with Jane South who would become his future wife. Bill and Jane married on August 18th, 1947. Bill was 22 years old at the time. Jane was 21 years old. They stayed in Savannah during the early years, later moving to Walterboro, South Carolina for Bill's job with Georgia Supply Company. In the 1960’s they moved to Atlanta and other than relocating to Miami for a short time, remained there until 1989 when they retired to Savannah. While in Atlanta, Bill became the Branch Manager for Hobbs Trailers and operated a tractor trailer sales and parts operation.  After retiring, Bill and Jane built a house on Spanish Hammock near Tybee Island. They had a long and happy retirement. They were involved in many activities on the Tybee Island and made many new friends. For years on Friday nights Bill called Bingo at the American Legion Post 154. Our family has many fond memories of coming to Tybee to play bingo on Friday nights.

Bill never met a stranger. He was a natural salesman with the gift of gab. He was always the life of the party. He could be in a room of 100 people he did not know and people would quickly gravitate to him. He loved his work and enjoyed life to the fullest. If you ask people who knew him what they remember most about Bill they would say that he made them laugh. And of course, his trademark, that cigar hanging out of his mouth.

It is very difficult for our family to say goodbye to our dad, grandfather and great grandfather. He along with his wife Jane were the center that our family revolved around.  Our family takes some comfort in knowing that his wife, parents and friends that have gone before him are there to welcome him to a new home in heaven.

He was preceded in death by his wife Jane South Lindner, his father W.H. Lindner Sr., and his mother Jessie Meitzler Lindner.

Graveside Service will follow at 2:00 p.m. in Greenwich Cemetery.

In lieu of flowers the family ask that you send a donation in memory of Bill Lindner to the American Post 154 at P.O Box 1225, Tybee Island Georgia, 31328

Sorry to see that my cousin has passed away. Had not seen him for many years but remember old times. Prayers to his children and theirs. May he Rest In Peace!