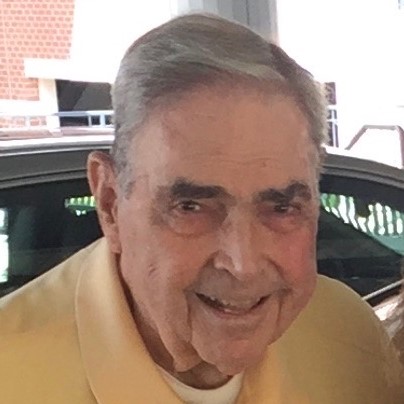 Jim was born on March 30, 1929 to Christine (Murphy) and James J. Broderick, Sr. in Manchester, New Hampshire and was raised in North Adams, Massachusetts. He graduated from M.I.T. with a degree in Chemical Engineering and received his Master’s in Chemical Engineering from the New Jersey Institute of Technology.  He also earned his M.B.A from Rutgers University.

He received a direct Officers Commission with the US. Army Chemical Corps and served a two-year tour of duty at the Army Chemical and Biological Corps.

He worked in many capacities at American Cyanamid, based out of Bound Brook, New Jersey for over 23 years. He left there to become President of General Abrasives Company in Niagara Falls, New York. From there he was recruited by the Edw. C. Levy Company of Detroit, Michigan to start up and run Micro Chemical Industries in Memphis, Tennessee and Stuttgart, Arkansas. From there he joined the Levy Company in Detroit as Vice President of Marketing. Upon retirement, he was a consultant to the Levy Company and numerous road building organizations in Southeast Michigan.

Jim and his loving wife of 64 years, Connie, started coming to The Landings on Skidaway Island in Georgia in 1982. They moved full time to The Landings in 2001 where they enjoyed years of golf, and new adventures and made great friendships.

In addition to his wife Connie, Jim is survived by daughters Karen Palmatier (Ronald); Carole Granger (Mark); and Patricia Cook (Charles). He is also survived by six grandsons (Brian, Steven, Kyle, Alex, Connor, Andrew), three granddaughters (Jeanette, Kristi, Amanda) and three great grandchildren (Ethan, Aubrey and Olivia).  Family and friends will remember Jim as a great storyteller and as an amazing man with a kind and loving heart, a strong faith and generous spirit, unequaled integrity, and a funny sense of humor. He will be greatly missed.

The funeral will be private and there will be a celebration of life at a later date.

In lieu of flowers, please make a contribution to the Salvation Army, 3100 Montgomery St., Savannah, GA 31405.

Connie and all, I am so sorry to hear of Jim’s passing. I have wonderful memories of us when I was at the Landings. He was special to me! ❤️ Heaven has another Angel! Hugs and love to all of you! Mary

I am so so sorry to read of Jim's passing, such a great fellow and a good good friend.

Connie, thoughts and prayers to you in your time of need. We pray that good memories will get you through this difficult time. Sincerely, Leigh and Gary Alphin

Connie & family, it has been a real pleasure knowing Jim and we will miss him very much. Love, Bill & Sharon

As you know Connie, you and Jim were the most outstanding neighbors anyone could ask for. We love Jim as a friend and father and mentor. We always enjoyed the time we spent together and we will miss him dearly. You and your family are in our thoughts and prayers!