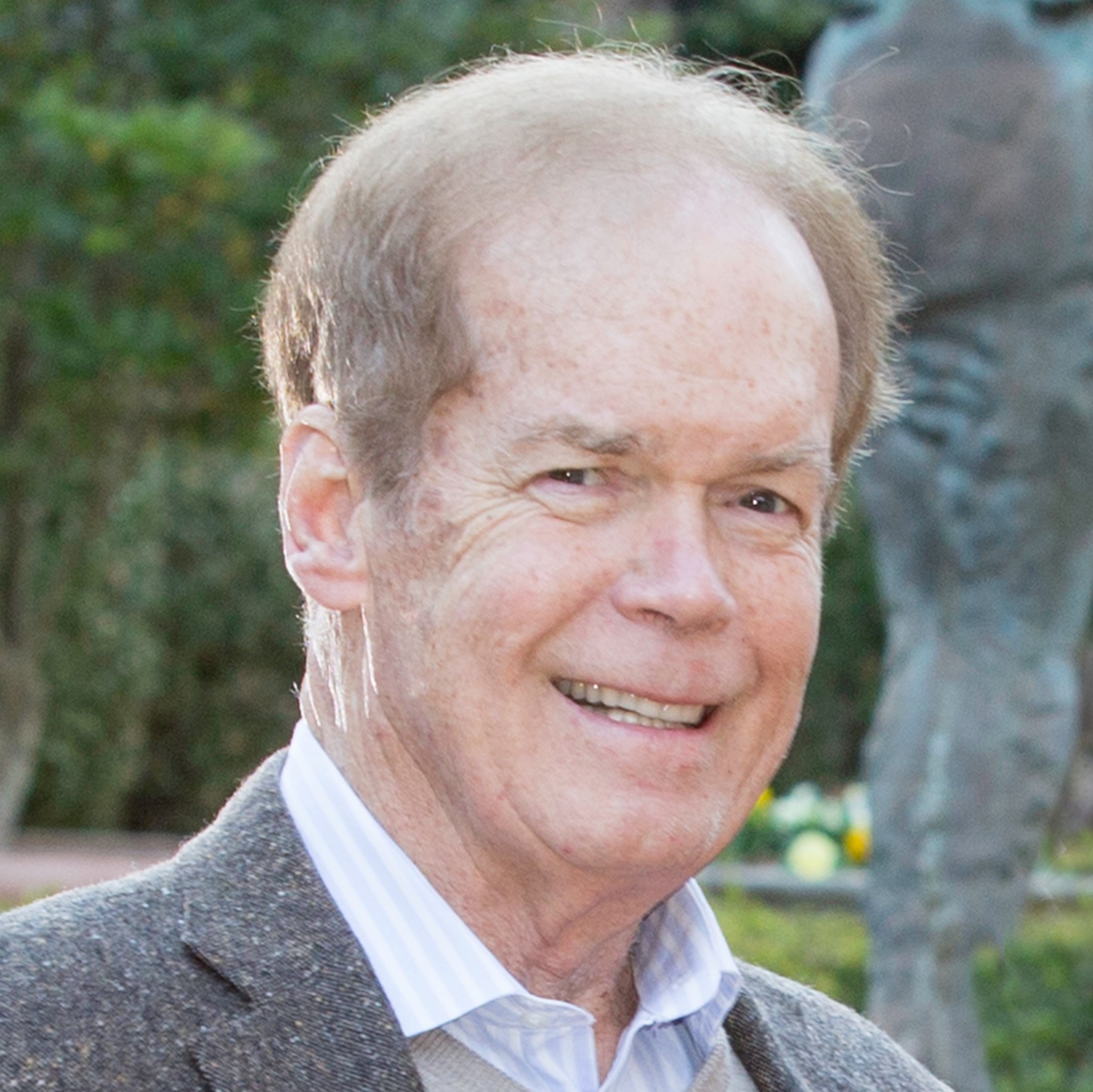 William Wright “Billy” Espy, a successful commercial real estate investment banker, died suddenly on Monday morning, November 30, of an apparent heart attack. His wife, Lee, and 20-year-old sons—Walker and Robert—were at home with him. He was 73.

Always an extremely hard worker, Billy started his career in banking in New York City; after several years there, he moved to Atlanta in 1972 to pursue new business opportunities and formed the Espy-Michaels Company which later became The Espy Company. Until he cut back about a decade ago to devote more time to his varied philanthropic interests, he was the president and managing partner of The Espy Company.

William Wright Espy, born March 7, 1947 in Savannah, was one of three children of Joseph Samuel and Marjorie Helveson Espy. Growing up, he and his older brother, Sam, played a lot of sports and were introduced to golf by their dad. They also participated in the Southeastern Bowling Conference in Charlotte.

Billy attended The Lawrenceville School in New Jersey where he played football and was on the golf team. He was in the 8th grade there when his father died. At that pivotal time of his life, Billy was warmly supported by neighbors and his dad’s golfing friends who rallied around to help him. Several years later, his mother married John Raymond Riley, a Georgia State Senator—and Senate Majority Leader at one point—who hosted political gatherings at the family home. These experiences and exposure to politicians—including Gov. Vandiver, Jimmy Carter and Bo Ginns –ignited an intense interest in Billy for the conservative politics that informed his lifelong political passions. Billy, Sam and their step-father won the pro-am tournament in the second year of the Heritage Golf Tournament on Hilton Head.

After graduating from Lawrenceville, Billy earned a Bachelor of Arts from the University of North Carolina-Chapel Hill. He was an active member of Delta Kappa Epsilon where he made many lifelong friends who regularly met at reunions over the decades. He remained a loyal supporter of both schools—including serving on Lawrenceville’s Board of Trustees—and of the fraternity.

Billy and Lee Kirby met over coffee following a service at the Cathedral of St. Philip; they married in June, 1996. Their twin boys were born in 2000. Billy was serious-minded and tenacious, and his penchant was to always be working at his desk. (In fact, he was at that desk in the office until midnight before the morning he died.) But he always made time for his family. He was eager to share places and experiences with them whether attending countless University of Georgia football games in the fall, spending summers in Sea Island, or celebrating New Year’s Eves in Palm Beach.

An avid and accomplished golfer until a back injury disappointingly curtailed the sport, he introduced his sons to the game—as his father had done for him. They, like their dad, have become exceptional golfers, playing at the Capital City Club.

He enjoyed spoiling his family, never missing birthdays and anniversaries—especially with surprises that gave him great joy to bestow. Though lavish in gifts, he was conservative in most other ways. Billy enjoyed describing himself as the only person who grew up in Savannah who didn’t hunt or fish. He never wore jeans and T-shirts but was most comfortable in khakis and button-down shirts. He listened to music from the 1960s on ’60s on 6 (Sirius). His tastes ran to good steaks and baked potatoes, breakfast at Goldbergs and lunch at the Blue Ridge Grill. He was a voracious reader of anything about politics.

A man of faith who regularly attended Christ Church Atlanta, he instilled in his boys the importance of character, integrity and faith—“Things no one can take away from you,” he would say. In keeping with those values, Billy enthusiastically and generously supported Athletes for a Better World, a nonprofit that encourages using sports to develop discipline, character, respect, teamwork, compassion and cooperation. He served as chairman of the board. Billy, who was diagnosed with Type 1 diabetes at 17, also served on the Board of Directors of American Diabetes Association Atlanta. Other boards on which he served include the Lawrenceville School (and various fundraising committees) and the Episcopal Radio-Television Foundation.

For many years he served on a variety of committees at the Cathedral of Saint Philip and was on the Program Advising Committee; and Carolina Funds, at the University of North Carolina. He was a member of the Urban Land Institute, Mortgage Bankers Association Georgia (chairing several committees), Mortgage Bankers Association American, the University of Georgia Gridiron Society, the Magill Society of UGA Bulldog Club, the Savannah Golf Club, and the Capital City Club.

Billy was introduced to UGA by his dad’s friend, UGA Coach Wally Butts, and when he returned to Atlanta he became more involved with the school, making the Honor Roll of Donors year after year. To honor his father, he created an endowment to fund three Joseph S. Espy Scholarships to student-athlete football players, with a preference to athletes from the Savannah area (currently Warren Brinson, Warren McClendon, Demetris Robertson).

He is survived by his wife, Lee Kirby Espy, and their two sons: Robert Espy and Walker Espy. His brother, Sam Espy, of Savanah and sister, Penny Espy Tillman, of Asheville, North Carolina also survive him. In addition, nephews Sam Espy III, Troy Espy, Stuart Espy and Blake Espy and their mother, Kathy Espy survive him, as do a niece and nephews, Marjorie Tillman Sennett (Tomas), Louise Tillman, Tommy Tillman and Joe Tillman. Bella, the family chihuahua, will miss Billy slipping “people food” to her when no one was looking.

Billy Espy will be buried in a graveside ceremony at the Espy family plot in the historic Bonaventure Cemetery in Savannah at 3 p.m. on Wednesday, December 9. The family will receive friends at the cemetery from 2 p.m. until the funeral hour. In lieu of flowers, to honor Billy, the family suggests a donation to Athletes for a Better World, www.abw.org/donate/ or 2997 Cobb Parkway, SE, Suite 300, Atlanta, GA 31139.

My condolences. Bill and I shared many experiences at Lawrenceville and North Carolina. I will miss him.

Please accept my deepest sympathy to the family. Ironically I first met Billy when I played golf against him when I was at Choate and he was at Lawrenceville. Back then he was tenaciously competitive, but always with the utmost integrity. Later we renewed our connections at the DKE House in Chapel Hill. Billy was a great guy, a great friend, and will certainly be missed by any and all that knew him. My thoughts and prayers are with the entire family. Most sincerely, John Rivers

As a former partner with Billy, I can attest to his hard work and unwavering integrity. His many contributions to family, friends, and the less fortunate will be greatly missed. My thoughts and prayers are with the Espy Family.

My sincere condolences to Lee, Robert and Walker. It was a genuine privilege to have worked with Billy over the last few years. He was held in great esteem by the business community. A man of clear moral character - a sense of humour - a love of family and country. He will be missed. Our thoughts and Prayers are with you. Richard and Anna Pestell

Billy Espy was one of a kind. Among many admirable traits he was loyal, passionate, determined, and wanted to do things for the right reasons. We will miss Billy greatly and smile at his remembrance. He loved his family and friends--and it was good to be his friend. Condolences to Billy's family-he loved you and loved to talk about you, and I enjoyed listening. Carl Dockery

The Wallace Butts family is sad to hear of your loss. Billy & his family were good friends to us and to the Georgia Bulldogs. My daughter Allison and I have enjoyed getting to know Billy at UGA events over the years. Love, Faye

Billy was a great step brother. He protected me and always assured me that he was there if I needed him. I am sad about his death and send my warmest regards to his family.

Lee, sorry to hear of your loss. I had a dream about Billy and thought of the many years I worked for him in Atlanta. I felt he may have passed and found the article online. Wishing and your sons the best.

So sorry to hear about Billy. It slipped up on me. We hadn’t visited or talked in several years but each time we did, the subject included memories of the “45th Street Gang” of the 50-60’s. The Espy boys and Penny, in her Mercury(?) convertible were items of note in the “hood”, across the street from Kitty Comer’s. Billy was always a good friend who obviously became a fine gentleman. He will be missed by his sons, family and many friends. God bless each and all. Randy Booker, Sr. Still in SAV and .... working!

Bill was known fondly around the DKE House as The Controller who always had answers to life’s questions, including the spread of the upcoming UGa game. He helped “train” our pledge class, making us better men and loyal Dekes. He was the DKE iconic “Gentleman, Scholar, and Jolly Good Fellow.” Jim Gray, Beta DKE ‘70

Dear Lee, Robert and Walker, Our deepest and most sincere condolences on the loss of your husband and father. We have so many wonderful memories with each of you during the early years at The Catehdral Preschool and at various sporting events in Atlanta. Billy was always there and beaming with pride for his sons and his beautiful wife. His enthusiasm was contagious, especailly at sporting events. We have loved seeing you over the years and our paths continue to cross. Our hearts are with each of you and we pray that Our God will comfort you during this loss. With much love, The Izard Family