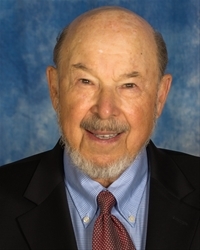 Bill was born in Ellicott City, Maryland to Thomas Albert and Clara Pauline Fleming. He was the youngest of three boys and grew up on a farm most of his young years where he learned to help out with the chickens and gardening.

At the age of 15, he attended Bob Jones Academy in Greenville, S.C. until his Senior Year of High School when he went back home to Laurel, Maryland to attend the local High School where he excelled on the Track Team and played Football. The highlight of his High School football career was the evening when his team was losing and Bill caught the ball and ran a 98-yard touchdown to Win….! He saved the day and won the game for the team. They made him feel like a real celebrity when they carried him off the field on their shoulders.

He returned to Bob Jones University after he graduated from high school and finished there with a B.A. Degree and then went on to obtain his Master’s Degree of Theology from New Orleans Baptist Seminary. While at Bob Jones, he was involved in Performing Arts and was in a movie entitled “Wine of the Morning.” During his years at Bob Jones, he used to go with a group of friends into downtown Greenville, S.C. and witness to people. While at the seminary in New Orleans he also went down on street corners and into Bars to present the gospel and witness to people about the saving grace of the Lord. After he finished at New Orleans Baptist Seminary, he pastored a couple of small churches: one was Hallwood Baptist Church, in addition, he interim pastored two rural churches on the Eastern Shore of Virginia and subsequently pastored a new start-up church which became Hazelwood Baptist Church in Baltimore, Maryland.

When his children were young, Bill built a travel trailer and took his family across country on camping trips over the years. As a result of his quickly growing family of four children and the need for a steadier income, he decided to work elsewhere.

In 1964, Bill began working for the Federal Government as an Auditor, where he gave 28 years of service. During those 28 years he had a number of very interesting audits. He always said how the Lord blessed him in his career through promotions and working with wonderful people. For a number of years, he was in a Car Pool with some great friends where he was the designated driver and would drive his old grey van with lawn chairs in the back. He is, to this day still friends with those guys. During his time with the Federal Government, Bill attended the Federal Executive Institute and Yale University and was trained through a number of the Department of Defense training schools. As a senior auditor, he lectured on auditing at Federal and State agencies. A couple of his very exciting audits was when he was sent to audit President Richard Nixon’s San Clemente Home during the time of his resignation as President. He was also the Contract Auditor of the John F. Kennedy Center. He could tell you, in detail, all about the marble, the crystal chandeliers and the fabrics used and from which countries they were donated. At that time, his office was on the unfinished construction site of the Kennedy Center.

In 1992, after 28 years, he retired from the Federal Government as Regional Inspector General of GSA.

Before attending Immanuel Bible Church, he attended First Baptist Church of Alexandria where he taught Sunday School in the Singles Class and where he met Anne in September of 1993, he began their courtship by inviting her to Country Western Dancing Lessons. The dancing lessons didn’t take, but a budding romance did and by the end of the 12-week dancing class, everyone knew they were meant for each other. After a courtship of one year, they were married on October 1, 1994. With a blended family, together they have six children, 12 grandchildren and four great grandchildren.

Many of his favorite memories include his family growing up and later helping to watch grandchildren. Going to soccer, basketball, football, volleyball, field hockey, Lacrosse games, and swim meets, family cookouts family birthday celebrations, family vacations at the Beach, taking a grandson to New York City, going to Tailgate Events at VMI and to Concerts at VA Tech and just spending time with family.

In his years at Immanuel Bible Church, Bill served as a Deacon and as President of the Faith & Culture ABF Class for a number of years and only retired from that after some health issues a few years ago. He loved the fellowship and felt as if the class members were his family. Before that he drove one of the IBC shuttles for a few years. In addition, He loved performing in many of the IBC Easter Pageants and in some Christmas Performances as a Shepherd, one of the Wisemen, as a King and a Pharisee. He loved performing on stage.

Bill’s serious hobby through the years has been Genealogy which has taken him many places, the farthest being in 1998, to England where he found the name of an ancestor, on a plaque on the wall of a church in the little town of Horton, England. His ancestor had been the pastor of that Church for 30 years. When he saw that, he said “I just hit pay dirt.” This trip was fully worth it. While in the dark dungeons of research while in England, Anne and her mother toured England.

As a result of his genealogy, Bill has written a novel of historical fiction intitled, “Birth of an American Patriot” which is in the beginning stages of being published. Its full of facts about his ancestors and interwoven with a story of war, intrigue, faith and love.

Until his last day, Bill engaged strangers wherever he met them in hopes of leading them to the Lord…. He asked them questions that lead to a discussion about salvation through faith in Jesus. To God be the Glory. He spent his entire life serving the Lord in one way or the other from the tender age of 9 when he gave his life to Jesus. On the day of his baptism, his Dad became a believer, too, which was very meaningful to him.

A graveside service will be held at 11:00 a.m. on Monday, December 14, 2020 in the Greenwich section of Bonaventure Cemetery.

I love and miss you so much, Honey.... I am comforted knowing that you are in heaven face to face with your Savior.....!

You will be missed on earth, but what an amazing time you will have in heaven. God certainly welcomed you with all the celebrity and more from the day you saved the day at the football game!

An amazing, affable man! Wonderful anecdotes of his career and ministry! Bill always had a cheerful expression and a kind word. His presence will be missed!

Absent from the body and present with the Lord, but we will miss you so much.

We will miss him for a very long time on this Earth but our sadness will be overcome by the joy of knowing he is in the presence of Our Lord. Bill Fleming was deeply passionate, loving and kind. He never missed an opportunity to share laughter and was so generous with his time, talent and treasure. We all have our favorite memories of Bill,which must include the many times he ministered directly to us. He was always ready and available to assist in any way possible at whatever expense to him personally. Very learned in the scriptures, he could quote chapter and verse at a moment's notice and it was always the word God needed the listener to here. Bill embodied the scripture "God has not given us a spirit of timidity but of power, love and discipline." II Tim 1:7. There is so much to the man we all love that we cannot possibly encapsulate our gratitude to Father God for allowing us the privilege to know Bill Fleming. Our comfort comes from affirming that we get to spend eternity rejoicing with him.

Bill was a wonderful soul and I always felt heartwarmed in his presence. He was first class! Much love to you Anne and deepest sympathies to you and the family especially Larry. xoxo

So sorry to hear of Bill's passing. May God's peace be with you at this time and bless you in your future days. May He protect you in your travel also. Blessings,

Bill blessed so many different generations with his laughter and encouragement. He had a way of making you feel like you were the only one in the room. All of the nurses and doctors left his bedside feeling that they had been cared for, and not the other way around. The last time I saw him he was reading through the book of Galatians. Gal 5:22 But the Fruit of the Spirit is love, joy, peace, patience, kindness, goodness, faithfulness, gentleness and self-control. Thank you for sharing your fruit and beautiful family with us. We will see you soon!

Anne, the few times I met Bill, I'm not surprised to read this wonderful story of his life. I know he will be sorely missed by friends and family, and especially you. But I also know that you will take comfort knowing that he has achieved his final reward! May God bring you peace during this blessed season. Mary Beth

To be in Bill's presence was always a blessing; one of the sweetest men on this earth. Some of the best times we shared with Bill and Anne were at Mike's American Grill where we went to lunch following church services at Immanuel Bible Church. I was hoping that Bill would be left here with us until Inauguration Day in January of 2021 to witness President Trump sworn into office once again; but I have a feeling that Bill already knows the outcome!

You will surely be missed. Thank you. for all your service to our church.

Dearest Anne - As a devoted Christian all of his life, I know Bill is in God’s care now and surrounded by his love and affection. You have been by his side caring for him and providing the love that is so important when you struggle with pain. I admire you so much and will always have you in my thoughts and prayers, dear sweet friend. With fondest memories and much love, Lynn

I know Bill is in a better place. May his memory be a blessing to all who knew and loved him! Donna Widawski,Ashburn, Va

Dear Anne and family, What a beautiful soul Bill was - He was only on loan from the Lord and I can see why. May your wonderful memories of love and laughter fill the sadness of his loss. Much love to you all. Renee

What a wonderful tribute to such a gentle and godly man. It was always wonderful just being around Bill. He was gentle, kind and always had a sense of fun. It was always apparent that he loved God and his family. We will miss him terribly, but we rejoice knowing that he is with the Lord and we will get to be there with him someday.

I am so grateful the Lord allowed Bill to cross my life path. Although we had only a short time his impact was tremendous. Bill's kind, generous, and thoughtful spirit has been an inspiration when I am in doubt. He will live on in my heart always and I know he will be missed by many. May he rest in peace. Amen.

We arę thinking of you THIS day. Comfort yourself that he is with the Lord.