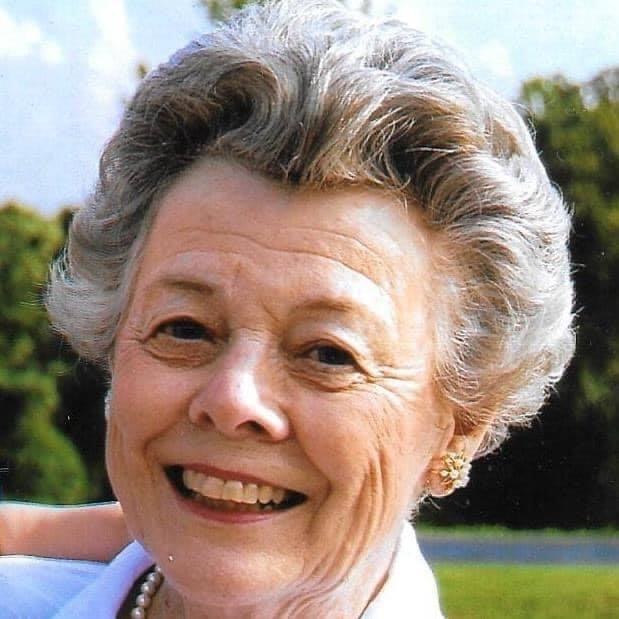 Ann attended Charles Ellis Elementary School, Richard Arnold Jr. High School, a 1948 graduate of Savannah High School and a 1950 golden graduate from Armstrong Junior College with an Associate’s Degree.  Ann’s longtime passion was her association with her family’s jewelry store, Desbouillons where she began working while in high school.  For many years, she assisted Savannah brides with their selection of china, crystal and silver.  Later, she and her late husband Jack operated the store until the 1980’s.

Ann was a member of St. John’s Church where she served as chairwoman of the Holly Days Bazaar and president of the Chancel Guild.  She was co-president with her husband of Heard School PTA, avid member of the Country Day School Booster Club and was very active with her children’s activities. She also served on the Board of Equalization for over eight years.

Sally, Ann, and family. I don’t have to tell any of you how special Little Granny was. I will always remember her kindness. She was always welcoming. She lived a full and abundant life and loved her family dearly. I am so sorry for your loss.

Our thoughts and prayers are with the entire family at this sad time. What a wonderful life she lived and how blessed all of you are to have had her in your lives. Many happy memories will be shared ! ❤️All our love, Helen Marie & Michael Fleming

I loved spending time with granny when she came to visit Katie and several of us were lucky enough to visit her in Savannah . She had amazing stories and I consider myself so privileged to know her .

Ann Altman was a very fine lady.I enjoyed working with she and Jack at the jewelry store in Medical Arts at Christmas time.I was their security officer..

My Mom Martha Meyers worked at the store on Broughton Street for years. She loved Ann and Jack. They always treated he with respect and love. Praying for the family

Thank you for 35 years of great stories, a few tears and lots of laughter. The picture of you in your obituary says it all. The Lord gave us Ann Altman, The Lord took from us Ann Altman; Blessed be the name of the Lord Forever.

I’m so sorry for your loss. I loved Mrs. Altman and her wonderful personality. She will be missed.

Sending love and prayers to all of Aunt Ann's love ones. She will truely be missed. I have so many treaured memories. i love you. Ashley

Ann was a wonderful mother, grandmother, and lady. I need not tell you how special she was. She loved those years when you shared a house. It was difficult at times, as it can be for any family having 3 generations in the home! But for her it was wonderful. She loved you all. I am so sorry for your loss. Bill Furey

Im so sadden at the passing of my friend Mrs. Ann. So was a nice person she thought me how to make her famous soups and we would spend time together going to the beauty shop and grocery store , doctors office ,i used to take her friends and her to the Yacht Club with the "girls" as she would say .She always gave me good advise.This time last year we where riding going get Christmas presents and singing Christmas songs on the radio. I will miss calling her when i was going to make soup , she was so delighted to help me with my soups. Im so glad and honored to have met such a kind Christian lady such as her. Love you Mrs. Ann you are gone but will never be forgotten.

Sally and Ann and family you guys are in my prayers im so sorry God be with you all .

I will always remember Miss Ann from when she and Jack moved into their first new home on De Renne Drive. Miss Ann and Jack were our neighbors for many years as their marriage and family grew. Miss Ann was always very kind to me, a young child at the time, and during my visits to Desbouillions to see her, Jack and Mr. and Ms. Morgan. She will always be remembered by me as "Miss Ann".