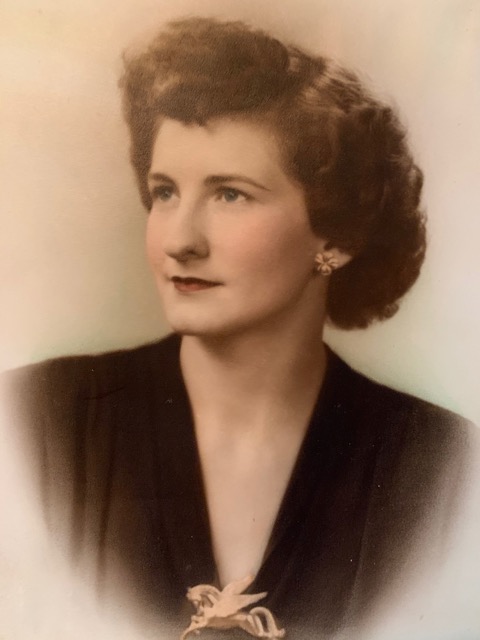 Beth attended Georgia Teacher’s College, now Georgia Southern, in Statesboro. At the start of WWII, she and her sorority sisters decided to leave school and apply for positions at Ft. Stewart (then Camp Stewart). Beth worked as the General’s Executive Secretary and from there began the greatest love story ever told!

Beth met Major George Candler Martin, they fell in love, then George left on a secret assignment to OFIT Air Force base. Following assignment, he was to go directly back to England however, he changed his plans and returned to Ft. Stewart to surprise Beth. She had cut her hair, thinking that it would be months before she saw him again, but she worried for nothing because he was totally sold! George returned from England when the war was over and they married on December 20, 1945. They planned their honeymoon around traveling to NYC for New Year’s Eve. They were there for the grand festivities in Times Square and ran into a lot of familiar faces and friends. Beth’s father had passed away which left her mother alone. George gave up his career to come home and oversee Beth and her mother’s family business.

Beth was a very active member of Ellabell UMC. She and George were MYF Counselors, she taught Bible school and Sunday school and was a member of the Women’s Organizations. Beth was a philanthropist and leader in her community with involvement in many civic and community organizations.

We will honor her life with a graveside service at Bird-Smith Cemetery (Ellabell, GA), Wednesday,  November 18, 2020 at 2:00 p.m. There will be a celebration of life at a later date.

Barbie and Jan, I’m sorry to hear about your Mother’s passing. She was always a rock in our church as well as while she and Mr Martin we’re youth leaders. We all loved them very much. She was the sweetest person all the time wherever I saw her. I know all of you will miss her very much. My deepest sympathy and prayers to all the family. Glenda Hendry Carter

I’m so sorry to learn of the passing of Mrs. Martin. She was such a special, gracious lady who endeared me to her heart with her gentle spirit. She was a special part of my childhood through Ellabell Methodist Church and then later as an adult as well. I am forever grateful for sweet memories we shared in her last years when she was still living in the family home at Arden. I loved her and was blessed to know her. My deepest sympathies to the family. Sending prayers and love!

Dear Barbie and Jan, I am so sorry to hear of your mother's passing. She was one of the most gracious and sweetest ladies i have ever known. You are in my thoughts and prayers during this most difficult time. GOD bless you and your families. Marcia

Barbie and Jan, I am so sorry for your loss. My thoughts and prayers are with you and the family.

Barbie and family, Kathryn and I are very sorry to hear of your mother's passing. Know that you and all the family are in our prayers.

So sorry to hear of your mothers passing,,,you are in my prayers

Dear Barbie, Jan and Family: Mrs. Martin was a true Southern lady! She was so special to me, always so kind and considerate. She holds an unforgettable place in my heart, and she will be missed. Prayers and much love to all of you.