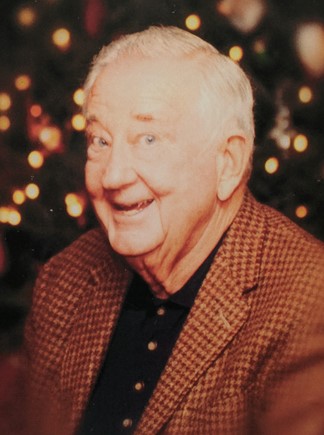 Guy D. Randolph, Jr., born July 30, 1923, passed away peacefully with family at his side on November 10 in Savannah, Georgia.

A lifelong Cincinnati resident, Guy moved to Savannah in 2013, after the passing of his wife Jane Russell Randolph, to be close to his sons. He grew up in Hyde Park with his parents Guy D. and Thelma Randolph and his sister Betty (Rowe), all pre-deceased.  He attended The Ashville School where he excelled in sports and leadership. He graduated from the Naval R.O.T.C. program at Northwestern University. Guy was a WWII Lieutenant J.G. in the United States Navy, serving on LST 343 in the South Pacific. Based out of Pearl Harbor, his ship supplied allied troops with armament. After the war, he joined his father in the insurance business and later founded the Randolph Company, which is helmed today by his son, Carter. Jane & Guy enjoyed 65 years of marriage and raised 4 children: Guy III (Sandra), Milton Russell, Carter (Patricia), and Mary McGraw (Michael). They have 10 grandchildren and 6 great grands. Guy was an avid tennis player at the Cincinnati Country Club and an enthusiastic golfer at the Camargo Club, where he and Jane were known to walk 9 holes almost daily, well into their 80’s. Guy served on the boards of The Christ Hospital, The L&L Nippert Charitable Foundation and the Camargo Club. Most significantly, he and Jane were founding members of the Greenacres Foundation. He was best known for his keen and quick sense of humor, and his devotion to family and country.  The Randolph Family is appreciative of the Marshes of Skidaway Island where Guy enjoyed 7 years and befriended many fellow patriots. We remain forever grateful for his loyal caregivers, especially Maria Montoya. Guy Guy will be sorely missed and deeply treasured. To all of his friends and family, he’d say, “Proud to know ya’”. Memorials may be made to the Greenacres Foundation, 8255 Spooky Hollow Rd., Cincinnati, Ohio, 45242.

A private celebration of life will be held with family.

As very, very close friends on both sides of our family of Jane and her Russell family in Maysville for generations, we were delighted to have enjoyed our friendship with Guy on his visits here and with friends in common in Cincinnati over the years. Lou Browning