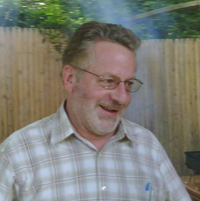 Paul “Porky” Swift passed away unexpectedly in his condo on Tybee Island, Georgia, on October 7, 2020. He was 78 years old.  He was born on June 29th, 1942 to Kathleen O’ Reilly Swift and Paul Swift, the youngest of three boys in Spokane, Washington.

Swift spent two semesters at Marquette University before departing on a solo quixotic hitch-hiking tour around Europe and the Middle East in 1960.  After recovering from a near fatal illness contracted in a remote Middle Eastern desert location, he returned to the states and attended Gonzaga University, WA. where he studied to become a Jesuit Brother. His verbal wit, love of language and clear literary talent were obvious to his Jesuit instructors who encouraged him to finish his studies at Boston College where he would attain a Masters in English.

One of his favorite authors, Jim Harrison wrote “Death steals everything except the stories.”   Some of Swift’s stories, adventures, insights and sly humor were detailed in his memoir, A Jesuits Journey through the Turbulent 1960’s.   As a young Jesuit he directed his religious beliefs in becoming an anti-war and civil rights activist in tandem with the Berrigan Brothers and the early day LBGTQ battles for equality.  All while balancing his three vows of poverty, chastity, and obedience with attending protests, hitchhiking with his mother, discussing James Joyce with a cop in Boston, and getting fleeced by a bathrobe-clad judge in Murdo, South Dakota.

As detailed in his book, when he witnessed his older brother and personal idol, Jerry, get railroaded from the order, a disillusioned Swift ended his 8 year sojourn with the Jesuits.  He then went on as a layman to work with John D. Rockefeller 3rd on corporate responsibility projects involving luminaries like Margret Mead; produced conferences and programs at Bard College for educators and later edited and wrote the eclectic and popular Newsletter on Newsletters.

In NYC, he courted the love of his life, Mary Nettles and inevitably won her hand in marriage.  The couple moved to Rhinebeck, New York where they raised their children, Zachary and Nicole.  His love and pride in family, whether parents, brothers, children or Mary were consistently on display. The Swifts home was warm and welcoming and attracted a motley and loyal group of friends who spent many a weekend night, New Year’s Day and Fourth of July celebrating life with plenty of stories and impromptu music at their home on Chestnut St.

In Rhinebeck, in addition to The Newsletter of Newsletters, Swift wrote and published The Beekman Arms: A History of the Oldest Inn In America and the locally popular weekly, The Rhinebeck Beagle. With a Nose for News, in which all the names were real and all the stories fake. Years after being voted the Most Humorous in both his grade school and high school graduating classes, Swift inevitably figured out how to make a few extra bucks with his wit.

Paul is survived by his best friend and wife Mary, his son Zach and his wife Jen, his daughter Nicole and partner, Kieffer and cousins throughout the USA.  And the scores of loving friends scattered throughout Tybee Island, the Hudson Valley, Spokane and the wide world.

In addition to his parents, Paul was predeceased by his brothers Jerry and Steve, both of whom passed away well before their time.

As his last story, rich in the juxtaposition that was his life, Paul will be celebrated at a Mass in the Vatican said by his dear Gonzaga friend, Michael Czerny S.R. and he will be honored at the Bar Church in Tybee Island.