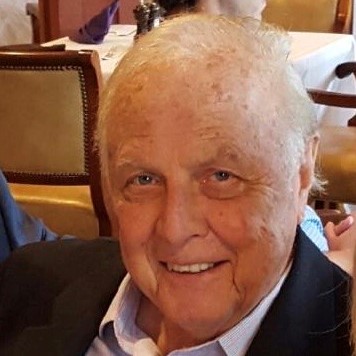 Joseph Edward Anckner (Joe) passed away on October 18th.  He lived the past 36 years at The Landings on Skidaway Island, in Savannah, GA.

Born January 30, 1932, Joe grew up in West Hempstead, Long Island, NY. He began his long career in aviation with Grumman American at 17, left to serve in the Navy as a navigator on AF-2S Guardians flying off aircraft carriers, and then returned to Grumman after his service.  While there he earned an engineering degree from Hofstra University, worked on the Apollo Lunar Lander, and helped design the early Gulfstreams.

In 1973, Joe moved to Savannah with Gulfstream and was the only international salesman at the time. He was personally responsible for over 200 G-II, III, IV & V sales, selling to heads of state, kings, and corporate business leaders in over 50 countries. Joe retired in 1994 as Senior Vice President of International Sales & Marketing.

During his career, he also ran the annual NBAA Gulfstream Golf Classics around the country.  In 1990 during the Gulf War, Joe was instrumental in arranging transportation to Saudi Arabia for the volunteers from United Way of The Coastal Empire in the Great Savannah Squares Bake Lift. The effort distributed 5 tons of home-baked cookie bars to our 20,000 soldiers from Fort Stewart's 24th Infantry Division deployed there.

In 1995, he was asked to take over Harrod’s Aviation in London, growing the FBO at Heathrow and opening new locations at Luton and Stansted.  Upon his second retirement, he specialized in buying and selling airplanes and helicopters for private customers.

Joe loved his work, enjoyed his many golf groups, his Tuesday night poker games, and especially his family and friends. He really loved the North Carolina mountains, where he & Vicki spent the last 17 summers and made many great friends.

Funeral at Bonaventure Cemetery will be private.

In lieu of flowers, contributions can be made to The Salvation Army, where Joe served on the Board of Directors for many years, or the Humane Society of Savannah.

The family would like to wish a very special thank you to Patricia Singleton & Vera Lang for their excellent care over the past many months.

So sorry for your loss Vicki, Michael and family. He will be dearly missed. He was a great man. I am honored to have known him as a friend and mentor. Find memories of our time at Gulfstream. May God give you peace and comfort during this time.

We are saddened to hear of the last flight of Mr. Joe Anckner. On behalf of the Learjet team, we would like to express our condolences to his family and friends.

My condolences to Mrs Vicki and family for their loss. I just started sitting with Mr Joe learning and understand his needs and wants through Mrs Patricia. I will miss sitting with him overnight and seeing his joyful eyes. It was my honor.

I hate to see another one of the good guys leave us. I know there is a good Rudyard Kipling quote about speaking with Kings (as Joe literally did at Gulfstream ) yet keep the common touch.... Joe lived by that. To Vicki and Michael I am sorry.

Vicki & family, we were so saddened to learn of Joe’s passing. I enjoyed working for and with him in both Bethpage & Savannah for many, many years. I am honored to have known him. We share in your sorrow and pray for comfort & strength in the coming weeks & months for you and all the family. May God bless each of you.

Vicki I am so sorry for your loss .

So sorry for you loss.

I will miss Joe, especially his delightful punctuality, but I know he is in Great Hands now, and forever.