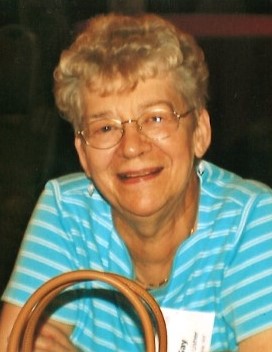 She graduated from Andover High School in the class of 1953 and attended The State University of New York at Geneseo.  Gay was the widow of William Usher married in 1958. She spent her married life as a homemaker.

Left to cherish her memory is one son, Steven Robert Usher and wife, Angell of Savannah, GA; brother, Albert Jerry Rogers and wife, Anne of Leesburg, FL; niece, Julie Rogers Palko and husband Dan of Leesburg, FL; sister-in-law, Regina Usher, in addition to family and friends across the United States.

Gay volunteered with numerous organizations in Western New York including Genesee Cancer Assistance Inc. as a driver, Genesee Election Board, United Way, and Genesee Nursing Home. Gay enjoyed travel, Pogo, books, music, movies, and did extensive genealogical research. Her greatest joys were spending time with friends and family and going to see various shows in New York and Savannah. Gay was generous and had a witty sense of humor. Many organizations were an important part of her life including, The Red Hat Society, Daughters of the American Revolution and the Order of the Eastern Star. Gay was a member of First Presbyterian Church, Batavia, NY and took an active role in the various activities of the church.

Due to the Covid-19 Pandemic, memorial services will be held at later dates in Savannah, and New York.

Interment will be next to her husband William with a Graveside Service at Hector Union Cemetery in Burdett, NY. All future dates will be announced.

Memorials can be made to The Alzheimer’s Association, Genesee Cancer Assistance Inc, Batavia, NY, or Crossroads House, Batavia, NY.

So sorry for your loss. I have wondered how she was doing.

We are sorry for your loss. Praying for your family

Steve and Angell, Mike & I are so sorry for your loss. You both are in our prayers as is the whole family. It is a comfort to know that she is safe in the arms of Jesus now. We love you both.

My heart goes out to you and Angel.I know you feel like you will never think of your mom and smile but in time you will. aunt Gay now you can eat all the hot bread you want and you won't pop. Love t all.

We are sorry for your loss.When I shared the news of Gays passing with my mother this morning,it brought a tear to her eyes, and then a smile. They were friends and shared many adventures and misadventures together.From Church functions, the many senior bus trips, the Red Hat dinners (I always felt sorry for their waitress,a bunch of crazy old ladies out on the town! ) to their cruise to Panama.They always had a lot of fun. Gay was never at a loss for words,a passport at the airport perhaps,but never words! Our sympathy to the family, and I will remember her fondly ,with a smile

I'm so sorry for your loss Steve and Angell. I love you and here to support you in any way I can.

Steven, I am so sorry for your loss. Your mother was a wonderful lady and will be greatly missed.

So sorry for your loss. Ms. Gay was a wonderful lady. I looked forward to going to work to see her and have our ice cream socials. She will truly be miss.