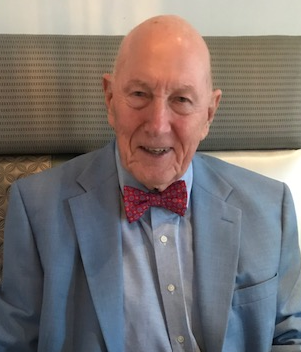 Growing up in Cleveland Ohio, Bob attended Lakewood High school where he earned a football scholarship to Ohio University and received a degree in business. He was an avid Cleveland Browns fan and never missed a game. Bob enlisted in the Army in 1951 and served in the Korean war as a first Lieutenant and was awarded the Bronze Star as well as participating in the Armistice which ended the war.  After the war he married Barbara Harris on August 27, 1955. She proceeded him May 29, 2000. Together they had 3 children: Wendy Catherine, Robert Birdel and Margaret Elizabeth.  Four grandchildren: Olaf Almquist, Ezekiel Almquist, Natalie Zaengle, Lorrain Piccirilli Vinyard; and two great grandchildren. Bob had a long standing career with US Steel in Cleveland then moved to Pittsburgh where he retired after 40 years as a regional sales manager. Bob and Barbara's passion for golf led them to Savannah GA, Skidaway Island.

After the passing of Barbara, he met Jane Noyes and they were married January 29, 2002.  Jane and Bob enjoyed golf, music, friends and Jeopardy. With Jane by his side, Bob met his last few years of physical trials with a continued zest for life and love for his family.

Bob sang in church choirs and listened to sermons from the pulpit his whole life ingraining the highest standards that modeled integrity, compassion and an indomitable spirit.  He was a long standing member of the Skidaway Island United Methodist Church. Bob will be greatly missed by all who knew him.

Memorial contributions can be made to the Spanish Oaks Hospice of Savannah and the Skidaway Island United Methodist Church Diamond Causeway Savannah GA.

Dear Jane and family, Lou and I send our deepest sympathy on the loss of dear Bob. He was one of our earliest friends on the Island. We have so many memories of great times with you. Please know you will be in our prayers, and may he rest in peace. Love, Lou and Gerry

Dear Jane, My condolences to you and your family on the loss of my uncle Bob. Even though I never got a chance to know you, it was a real pleasure spending time visiting with him, Aunt Barb, and their children (Robert, Wendy, and Margaret) during the years when I was growing up. I am sorry that I never got a chance to accept his invitation to come down and visit you and him in Savannah, GA. I've heard that it is a beautiful area. May God comfort you and your family during this time of great loss. Please take comfort in knowing that Uncle Bob is now home and spending time with his Lord and Savior Jesus Christ. Take care! Love, Neal Ostlund

My dad and Abraham Lincoln were two role models besides biblical patriarchs. I couldn't have asked for or known a more devoted parent to raise me. His constitution was unshakable as was his values and ethics. God had given a wealth of quality character traits which he employed in what he thought, said and did. His tenaciousness and discipline maneuvered him through the chaotic 60's and 70's while providing for and raising his family. His exemplary military service in Korea was only known about from accolades but never from him . My dad was a man of few but gracious words. His sense of humor and wit was enjoyed by his family and friends. Except for a couple of times did he voice "I love you' - it was always evident in what he did for and to me. Dad's life started with the great depression and ended with the Corona virus.