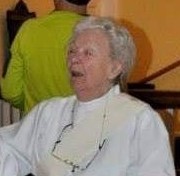 The Rev. Edna "Eddie" Adkins, Deacon
We mourn the loss of the Rev. Eddie Adkins, a deacon of the Diocese of Georgia who died at home on  Saturday, November 30, surrounded by family and friends. Services will be held at 11 AM, Saturday, January 4 at All Saints Episcopal Church on Tybee Island with Bishop Scott Benhase officiating and the Rev. Canon Frank Logue preaching.

Born in Denmark, South Carolina, Deacon Eddie, as she was known,  grew up in Charleston. She liked to play church when she was little, often carrying a Book of Common Prayer around even before she could read it. As a teen, she was active at St. Peter's Episcopal Church in Charleston and went to the Diocese of South Carolina's camp at St. Christopher's each summer. She graduated from Winthrop College in May 1955, serving as a first grade teacher on Sullivan's Island before marrying Bob Adkins the next year. Bob and Eddie were together for 60 years before his death in 2017. The two had five children, with two sons not surviving infancy. Their children Julie, Charles, and Amee lived the life of Air Force children with the family stationed around the country as well as in France and Germany.

Following Bob's retirement in 1970, they moved to Savannah. Deacon Eddie worked first as a School Media Specialist at Beach High School, later serving at Jenkins High School and Bartlett Middle School. She earned a Master's in Education Media from Georgia Southern University and then an Education Specialist degree from the University of Georgia during that time. A real turning point in her spiritual life came in 1985 when Deacon Eddie joined the Daughters of the King. The regular prayer she adopted then remained a fixture of her days for the rest of her life.

In 1994 she became a Postulant for Holy Orders as a Deacon following a call she described as feeling "Like the Palm Sunday colt. 'The Lord has need of me.'" Bishop Henry Louttit, Jr. ordained her to the diaconate on January 11, 1997. She served at All Saints', Tybee Island, and at St. Luke's, Rincon. She was also active in mentoring future deacons and served as the Co-Chair of the Deacons' Formation Committee. For health reasons, Deacon Eddie retired from actively serving as a deacon in 2016. She maintained her prayer life, close family and church ties, her amazing smile, and abiding sense of joy until she died at home on Saturday surrounded by her family; Julie, David and Robbie, Charles and Melitta, and Amee and Marcena.