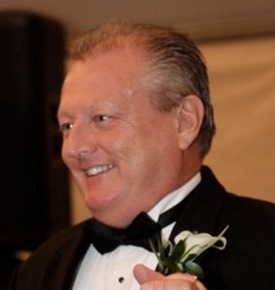 While heaven has always been known as a place of peace, calm and comfort, the rules were changed on October 7, 2019 when John Gargano, of Savannah, GA, busted through the pearly gates. Often the life of the party, John had a mission to bring joy to everyone he interacted with and was known to pull laughter from even the toughest critics. Pranks were a way of life, and John sought out to pull the funniest pranks on everyone he could. While he was often the happiest or funniest person in the room, he taught everyone that he could set the tone and instill fear and a sense of seriousness in a matter of seconds… a skill that he perfected when screening any boy who dared attempt to date one of his daughters in high school. Stories of him torturing boys with ice cubes, practicing shooting guns or discussing his affinity for breaking legs kept his four daughters mostly single for their high school years. John was a family man who made family a priority over everything else. Some of his favorite things to do with his family included fishing in Cape Cod, catching lobsters fresh from the sea, playing games at home and traveling while seeking new adventure. John loved adventure and fresh new ideas, so much so that around his 30th birthday, he decided to pick a new “mid-life” crisis to focus on each year until his death. While they started innocently enough with a declaration that he would be braving Boston winters in sandals or dying his hair so frequently it turned pink, some of his more exciting choices included exotic cars, full-sleeve tattoos, art collection and playing the saxophone. John was a good friend. He was always willing lend a helping hand and made some of life’s most daunting tasks full of fun. John is survived by Nancy Gargano and their four daughters Rachel Dworetsky, Theresa Gargano, Diana Fahrer and Rosa Scrymgeour as well as his son-in-laws Larry Dworetsky, Derek Fahrer and Drew Scrymgeour. He was a wonderful “Papa” to his 5 and a half grandchildren Johnny, Max, Mason, Lucy, Wyatt and a little Scrymgeour on the way. John was predeceased by his parents John and Alice Gargano of Cambridge, MA. A private memorial service will be held for his immediate family. In lieu of flowers, please make donations in his memory to the National Multiple Sclerosis Society, a charity that was near and dear to his heart.

For some, obituaries are finite, a brief encapsulation of our time shared with those that matter most, but not John. His is a legacy that lives on beyond the text, beyond the fleeting moment, but resonates through his loving family and the impact he made on so many lives in his short time with us. His memory will be forever tattooed, unique as a fingerprint, on the hearts on everyone he met.
SHARE YOUR CONDOLENCES

Dear John, I'll never forget the first time we met. I said I was terrible remembering names and you said just think of the bathroom john. ? you were always full of great advice, very kind and giving person. I can't believe you are gone. Way too soon.

Dear John, I'll never forget the first time we met. I said I was terrible remembering names and you said just think of the bathroom john. ? you were always full of great advice, very kind and giving person. I can't believe you are gone. Way too soon.